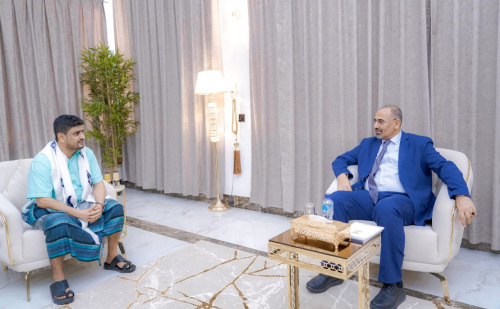 The president Aidarous Qassem Al-Zubaidi, President of the Southern Transitional Council (STC), Supreme Commander of the Southern Armed Forces and deputy head of the Presidential Leadership Council (PLC), on Saturday, met at his office in the Presidential Palace in Al-Fateh area in Al-Tawahi District, in the capital, Aden, with Security Director of Abyan governorate, Brigadier General Ali Naser Al-Dheeb Ba Azab; known as "Abu Misha'al Al-Kazmi" and several security and military commanders in the governorate.

President Al-Zubaidi highlighted what has taken place in Shurqra city during the past few days and perceived it as the establishment of a new stage of Southern reconciliation and tolerance that has dealt a severe blow to the malicious rumourmongers trying to emit the poison of division and fuel strife to jeopardize the people of the southern homeland, with the aim of diverting them from their supreme goal of liberation, independence and restoring the State of the South.

President Al-Zubaidi reiterated that Abyan has its political and military

presence, weightiness, and standing, since it represents the flank of the South, its geographical dimension, and food basket, noting that the sacrifices and struggles made by the people of Abyan in the liberation journey of the Southern Revolution were and are still appreciated and valued by all the people of the South.

President Al-Zubaidi stressed the importance of intensifying efforts and working to defuse the causes of tension due to the incidents that recently occurred in Abyan governorate, and to redress the situation in a way that soothes souls, creates a state of solidarity and rapprochement, and turns over a new leaf in which the interest of the South is above all personal interests and considerations.

President Al-Zubaidi called on the commanders of the security services in the governorate to intensify their efforts and raise the degree of operational coordination among the various apparatus in a way that consolidates the state of security, stability and maintains the public tranquility of citizens.

For his part, Brigadier General Abu Misha'al Al-Kazmi expressed his sincere thanks and appreciation to President Al-Zubaidi for the good reception and praised his efforts to strengthen the Southern national cohesiveness. At the same time, he has reaffirmed that the people of Abyan have been and will always be firm on the path and principle of liberation and independence, and are ready to make more sacrifices to unite the southern endeavours and maintain the security and stability of their governorate.