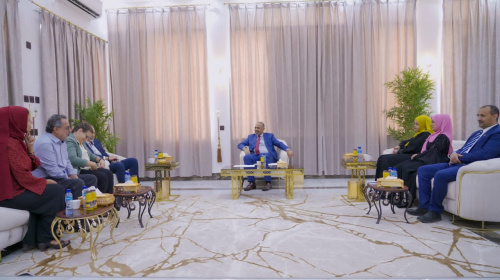 The president Aidarous Qassem Al-Zubaidi, President of the Southern Transitional Council (STC), Deputy head of the Presidential Leadership Council, on Saturday morning, at his office, in the STC's headquarters, in the capital Aden, received the delegation of the German "Berghof" Foundation (BF) headed by Mr. Oliver Wils, Head of Middle East Department in Berghof Foundation, Responsible for BF in the Middle East and North Africa; Co-Director of the National Dialogue Support Programme in Yemen, and Ms. Dalia Barsoum, leads the BF's Yemen Unit.

At the beginning of the meeting, the president Al-Zubaidi welcomed the delegation of the German Foundation, lauding its exerted efforts to promote peace opportunities and convergenting the veiws, expressing his hope that the Foundation will play a major role in supporting the aspirations of the people of the South and granting them the right to self-determination.

In the meeting, President Al-Zubaidi reiterated the position of the STC in supporting the political process led by the special envoy of the Secretary-General of the United Nations to Yemen, highlighting the importance of the STC's involvement to draw the political process that leads to a comprehensive and sustainable peace in the entire region.

For his part, Mr. Oliver Wils expressed his happiness in meeting the president Al-Zubaidi, affirming that this paid visit of the Foundation's delegation to the capital, Aden, comes within the framework of the quest of the Foundation to understand the perspective of the STC to push peace-making paths to end the crisis in Yemen, and the ways in which the Foundation could contribute to supporting the STC and the remaining parties to reach common understandings leading to a comprehensive and sustainable peace.

Mr. Wils expressed the readiness of the Berghof Foundation to adopt more serious meetings and dialogues to converge the veiws, that comply with the outcomes on the ground.

The meeting was attended by Mr. Ali Saif Hasan, head of the Political Development Forum, Mr. Anis Al Sharafi, Head of Political and Planing Affairs in the General Directorate for Foreign Affairs (GDFA) of the STC, and Mr. Imad Mohammed, office director of the deputy head  of the Presidential Leadership Council.