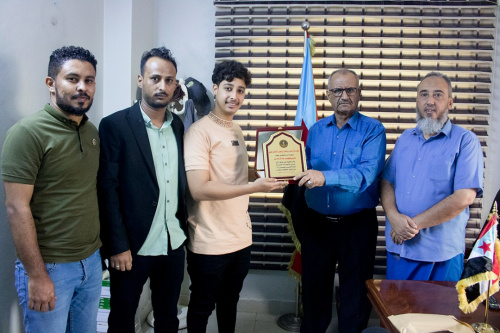 Mr. Fadhl Mohammed Al-Gaadi, Deputy Secretary-General of the General Secretariat of the Presidency of the Southern Transitional Council (STC), on Wednesday, at the headquarters of the General Secretariat, in the capital, Aden, honoured the student with special needs, Ali Nsr al-Sufi, for excelling in the secondary school examinations, and obtaining 95% as the highest grade in the literary section.

At the felicitation, which was attended by two members of the Youth department, Mr. Jamal Al-Radfani and Mr. Ahmed Al-Awlaqi, and the father of the student, Mr. Al-Gaadi extended his congratulations and blessings to the student, al-Sufi, for his unique scientific excellence, expressing his pride in the fulfilled achievement, highlighting that this excellence deserves to be a narrated story of success to generations.

For his part, Mr. Nsr al-Sufi, the father of the exceptional student, expressed his happiness with this felicitation and appreciation for such a favorable act from the STC, extending his thanks to the Deputy Secretary-General, assuring that this honour will surely give his son, even though he is "deaf and dumb", a push to further perseverance and diligence in his higher education.

At the same time, the two members of the Youth and Students Department of the General Secretariat expressed their hope that the over-achievement of this student will be a motivating and inspiring factor for other colleagues to track his footsteps through the educational process. Furthermore, they conveyed to him the greetings of Mr. Moamen Al-Saqqaf, advisor of the STC's President for youth affairs and Head of the Youth and Students Department, who affirmed his support for this student through his various educational stages and at all levels.