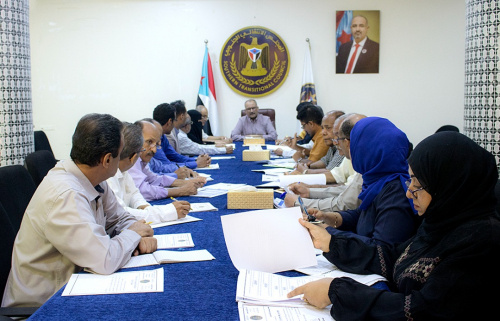 The General-secretariat of the Southern Transitional Council (STC) held its periodic meeting, on Wednesday, in the capital Aden, chaired by Mr. Fadhl Mohammed Al-Gaadi, member of Presidency of the STC, Deputy of the secretary general.

In its meeting, the General Secretariat focused on the most important developments in the southern landscape, foremost of which was the developments of the traumatic events in Shabwa governorate, which encountering an armed rebellion by forces loyal to the Muslim Brotherhood with the aim of sabotage, destabilizing security and stability and intimidating safe citizens to achieve the coup goals against the decrees of the Presidential Leadership Council and the local authority in Shabwa.

The meeting, too, discussed weekly-activity report of departments of the general secretariat, which included the significant activities and works implemented in various aspects. Similarly, the meeting listened to a report on job discipline of cadres of the General Secretariat's departments for the month of July 2022.

in addition to reviewing and approving minutes of the previous meeting.