General Secretariat Gets Briefed on Endeavors of ESNDT

General Secretariat Gets Briefed on Endeavors of ESNDT 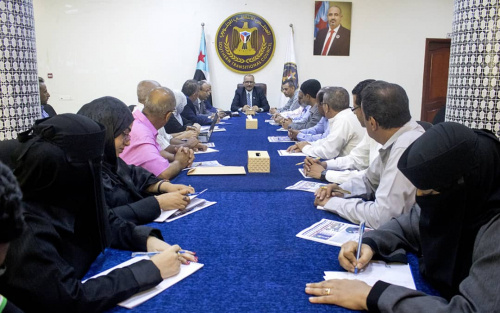 The General-Secretariat of the Presidency of the Southern Transitional Council (STC) held, on Sunday, at the headquarters of the Secretariat in the capital, Aden, a meeting that included heads and representatives of departments of the General Secretariat with Members of the External Southern National Dialogue Team (ESNDT)

Mr. Fadhl Mohammed Al-Gaadi, member of Presidency of the STC, Deputy of the secretary general, initially delivered a welcoming speech of the members of ESNDT, which includes Dr. Saleh Mohsen al-Haj, Deputy head of the ESNDT and the rest of the team members, expressing his appreciation for their interest to hold this meeting to closely view the activities and role of departments of the General Secretariat, and to discuss ways of cooperation and coordination between the General Secretariat and ESNDT lauding the efforts made by this team to achieve consensus and consolidate the southern cohesiveness.

In the meeting, a brief explanation was given on the departments and sections of the General Secretariat and the undertaking of activities within the framework of its specializations in accordance with the directions and plans of the STC; as per its assumed national responsibility in representing the cause of people of the South, affirming the spirit of teamwork to achieve whatever serves the interest of the South, its cause and people.

In turn, the members of ESNDT expressed their happiness with this meeting, giving an overview of the nature of the Southern Dialogue abroad, its stages and procedures related to encouraging the southern political parties and components to actively engage in this dialogue to serve the public interest of the South, bring victory for its just cause and consolidate its foundations to reach agreement to sign a national code of honour preserving the national exerted efforts.

The meeting reviewed the endeavours of ESNDT and the Internal Southern Dialogue Team (ISDT), in accordance with the directives of the president Aidarous Qassem al-Zubaidi, President of the STC, as well as the fulfilled successes, reached outcomes, and work orientations, and discussed the role that the General Secretariat and its departments can play in supporting the mission of the ESNDT and ISDT, and the endeavours of these teams within the framework of the dedicated plans for each department to achieve the hopes and aspirations of the people of the South.