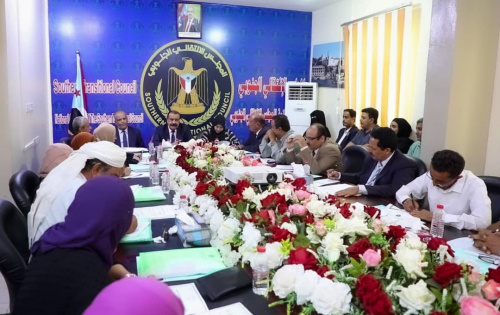 In the meeting, the chairmam of the Assembly referred to the importance of the STC's participation in Riyadh consultations, represented by leaders from Presidency of the STC, administrative body in the Assembly, general secretariat and heads of the governorates, which had a positive impact on the process of openness to political dialogue with the various forces, as well as the positive position by the STC towards modernizing, developing and betterly improving work of the State institutions.

Wbereby the STC expressed a good reception of leadership of the Sate in the capital, Aden, and commited to improve the security conditions,

Major General Bin Brik stressed the importance of improving the living and service conditions that have sufferingly burdened citizens, as well as working to build and improve performance of State institutions.

During the meeting, the chairman of the National Assembly indicated the highly significance to hold the fifth session of the Assembly, reviewing the issues that will be discussed, and assigned the responsibility of arranging a well-prepared session to the administrative body, he also called on all members of the National Assembly to actively and positively participate in the session, to convey concerns and demands of the people and take responsibilities of their issues.

The chairman has stressed the need of unifying the southern efforts, putting aside the differences by holding meetings, and expanding consultations with southern leaders from various components, as well as strengthening cohesion and confidence among the southern people.

To the end of the meeting, the substantive committees have been assigned to review documents of the session, the view was taken that the administrative body will continue its preparatory meeting at the beginning of next month.