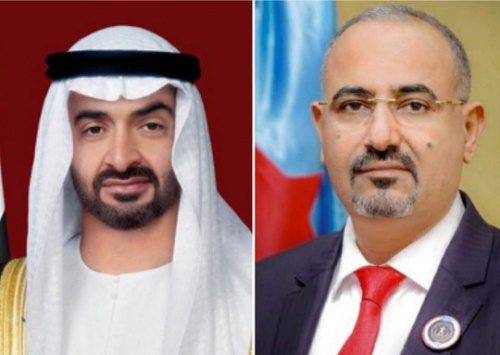 The president Aidarous Qassem Al-Zubaidi, President of the Southern Transitional Council (STC), Deputy head of the Presidential Leadership Council, offered a cable of congratulations to his highness Sheikh Mohammed Bin Zayed Al Nahyan on the occasion of being elected as the president of the United Arab Emirates (UAE),

The complete congratulating cable as follows:

the president of the brotherly United Arab Emirates,

It is my immense pleasure to offer to your highness the best of congratulations and blessings on the occasion of being elected as the president of the UAE, succeeding the late president; his highness Sheikh Khalifa Bin Zayed, may Allah bestows His mercy on him,

We have the complete confidence that your highness are going to continue leading and completing the ongoing process of development and granting that have outstandingly been taking place in the UAE since its foundations that were laid by the founder of the Union, Sheikh Zayed Bin Sultan Al Nahyan, may Allah bestows His mercy on him, and followed his footsteps; the late Sheikh Khalifa bin Zayed.

We have opportunity to express our deep gratitude for the true brotherly positions of the UAE with our people in light of what they have been facing in these exceptional circumstances, looking forward to continuing these positions in confirming the strong historical relations between our peoples and two countries.

May Allah guide and lead your footsteps in leading the course of construction and prosperity for the State and people of the UAE towards further advancement and development.