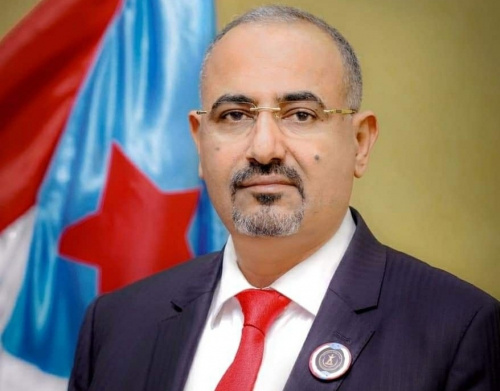 The president Aidarous Qassem Al-Zubaidi, President of the Southern Transitional Council (STC), Supreme Commander of the Southern Armed Forces, offered condolences and sympathy for the martyrdom of Commandant of Counter-Terrorism Forces in Al-Dhale'a Governorate; Colonel Mohammed Yahya Al-Shobaji, and Deputy Commandant of the Security Belt Forces in the governorate; Colonel Walid Al-Dhame’a and their comrades, whose pure souls ascended to the Creater while confronting elements of terrorism and extremism, on Friday.

In his cable of condolences, the president expressed his sincere sorrow and sympathy to families, relatives, companions, and the whole personnel of the Southern Armed Forces, of the martyrs, praised the heroic epics they have immortalized while accomplishing their national duty in confronting the Houthi militias and elements of terrorism and extremism; the last epic took place yesterday and resulted in the death of the whole terrorist elements that tried to attack the Camp of the Security Belt Forces in the governorate.

In his condolences, the president Al-Zubaidi expressed his honour and pride of the firm and heroic tasks performed by the two martyrs; Al-Shobaji and Al-Dhame'a, and their valiant comrades from the Counter-Terrorist Forces and the Security Belt Forces, who valiantly confronted the elements of terrorism and extremism, embodying the highest meaning of heroism and sacrifice in defending soil of the country, security and stability, affirmed that pure blood shed in defensing this country, its freedom, dignity and soil will never be gone unheeded, and such treacherous terrorist acts will not discourage heroes of our southern armed forces from continuing their sacred national duty to eradicate terrorism that has been sent out to the liberated South to destabilize security, stability, and undermine aspirations of its people .

In the end of his cable of condolences, the president prayed to Allah the Almighty to bestow His vast mercy and forgiveness on the martyrs of duty, and to make their abode in paradise with the prophets and the truthful, and a goodly company are they!

To Allah we belong and to Him is our return.