With participation of Al-Awlaki and Al-Ghaithi.. Transitional Council Executive of Shabwa holds its periodic meeting in Ataq

With participation of Al-Awlaki and Al-Ghaithi.. Transitional Council Executive of Shabwa holds its periodic meeting in Ataq 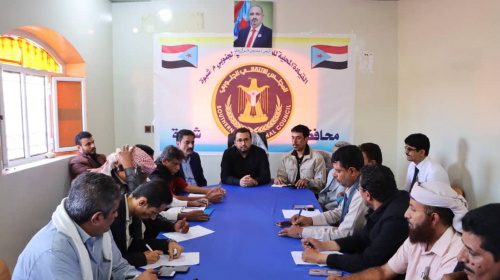 The executive body of the local leadership of the Southern Transitional Council in Shabwa governorate, on Thursday, held its periodic meeting in the city of Ataq, with the participation of Mr. Salem Thabet al-Awlaki, member of the Council's presidency, and Mr. Mohammed al-Ghaithi, head of the General Directorate of Foreign Affairs of the Council.

At the beginning of the meeting, the attendees stood to read Al-Fatihah on the souls of the martyrs of the heroes of the southern armed forces in the battles to liberate the districts of Bayhan, represented by the forces of Giants and the valiant resistance who fell in defense of the southern land, asking Allah Almighty to bestow mercy and forgiveness on them, and to dwell them in paradise.

The member of the Presidency, Salem Thabet, stressed the importance of the political and diplomatic efforts undertaken by the Southern Command under the leadership of President Aidarous Qassem Al-Zubaidi, the President of the Transitional Council, praising the military victories that culminated in the liberation of the districts of Bayhan, and returning them to the bosom of Shabwa and the South, with the support of the Arab coalition forces.

For his part, the head of the General Directorate of Foreign Affairs, Mohammed Al-Ghaithi, saluted the efforts of the executive body in the governorate, headed by the head of the authority in the governorate, Brigadier Ali Al-Jabwani, and the sons of Shabwa, who were prelude to creating objective and subjective conditions for making change, calling on everyone to sense national responsibility towards the rapid developments.

Brigadier General Ali Al-Jabwani opened the meeting by welcoming the member of the Presidency of the Transitional Council, Salem Thabet, and the Head of the General Directorate of Foreign Affairs, Mohammed Al-Ghaithi, congratulating all the great victories achieved by the Southern Armed Forces represented by the Giants’ forces in the liberation of the districts of Bayhan, calling on the members of the Executive Body to redouble the efforts at a high pace during the coming period.

The Executive Body valued the great political efforts made by the President Aidarous Qassem Al-Zubaidi, in order to liberate Shabwa from the Houthis, as well as the deployment of Shabwa Defense Forces, as well as the great role of the Giants' forces in liberating Shabwa districts.

The Executive Body of the Transitional Council in Shabwa praised the great role of the Arab coalition countries led by the Kingdom of Saudi Arabia and the United Arab Emirates in supporting the southern armed forces represented by the Giants forces in achieving victory by liberating the entire territory of Shabwa governorate.

The Transitional Council Executive of Shabwa expressed its support for the efforts of the governor of Shabwa governorate to carry out comprehensive administrative and security reforms for the benefit of the people of the governorate, stressing the importance of following up on the cases of detainees and those disappeared in the prisons of the former Brotherhood authority, according to the governor’s decision to release all detainees.

The meeting commemorated the 16th anniversary of the Day of Southern Reconciliation and Tolerance, stressing in this regard the importance of embodying the values ​​of reconciliation and tolerance among southerners on the ground, and strengthening southern national cohesion among the people of the South.

In its meeting, the executive body also discussed a number of issues on its agenda, and took a number of decisions and recommendations in this regard.