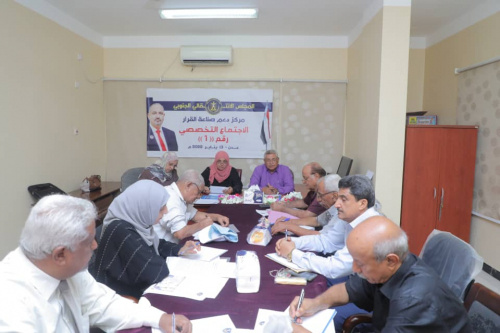 In the meeting, which was chaired by Dr. Khaled Bamadhaf, head of the center, Dr. Suhair spoke, in which she praised the Decision-Making Support Center for assisting the Presidency of the Transitional Council in formulating future ideas to meet all challenges, and find solutions to the issues and problems facing the cause of the people of the South.

Suhair indicated that the center will contribute to strengthening the political work of the Council, given that the Council's goals and objectives aim to serve the cause of the people of the south, who demand the restoration of the state of the south with full sovereignty.

Dr. Khaled Bamedhaf opened the meeting with a speech in which he welcomed all members of the Decision-Making Support Center, stressing that this meeting is a new path in the system of meetings that deals with decision-making projects in a new professional and technical manner, which can help the leadership in shedding light and dealing with the challenges facing the South. .

Bamadhaf added, "This day coincides with the 16th anniversary of the Day of Southern Reconciliation and Tolerance, during which the southerners announced a new page in the history of the South, with struggle and sacrifice, stressing that this stage requires everyone to support this southern alignment to defend the South as an identity and people.".

The meeting, in which legal specialists Dr. Hoda Mahdi Al-Sayed and Dr. Jaafar Al-Shalali participated at, discussed the press release issued by the Decision-Making Support Center of the consultative meeting on the Riyadh agreement between reality and ambitions, which was organized in December last year.

The meeting stressed the need to present studies and strategic plans based on scientific foundations and facts, to help achieving the comprehensive development that the Transitional Council seeks.