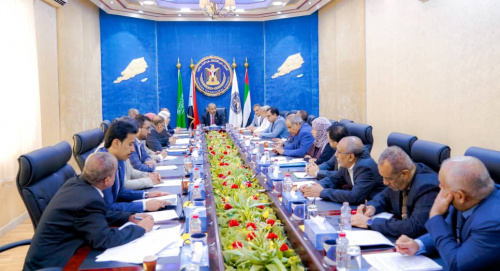 The Presidency of the Southern Transitional Council, on Thursday, held its periodic meeting, headed by President Aidarous Qassem Al-Zubaidi, the President of the Council.

In the meeting, the Presidency reviewed the political, security, military and service issues of the South, and its cause and people, stressing the need to raise determination and pace of work, especially the field and military ones.

In its meeting, the Presidency of the Council listened to a comprehensive briefing, presented by the member of the Presidency, Mr. Salem Thabet Al-Awlaki, on the situation in Shabwa governorate, stressing that what is happening in Shabwa of apparent failure to defend it, by handing the militia of the Muslim Brotherhood its military positions in upper Baihan over to the Houthi militia, comes as a prelude to a malicious conspiracy against Shabwa governorate and its sons, which threatens of handing the Muslim Brotherhood militia the entire province over to the Houthi militia, stressing that this exposed conspiracy will not pass unnoticed, and the Southern Transitional Council, and the Southern Armed Forces, with them the proud people of the South will have their firm and determined response, considering that Shabwa represents the strategic depth of the upcoming federal state of the South.

The Presidency of the Council called on all the people of the South to unify ranks, general mobilize, and direct all capabilities and abilities to confront the invasion against the land of the South by the Iranian-backed Houthi militia, and the forces conspiring with it, reiterating the assertion that the southern armed forces are in their full combat readiness to defend the South, and its land and people against any danger, or invasion.

During the meeting, the Presidency of the Southern Transitional Council directed for quick payment of  salaries and dues of the southern military and security forces, and to overcome any difficulties facing the disbursement process.