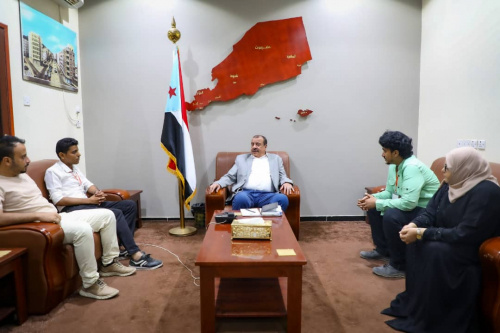 The Chairman of the National Assembly of the Southern Transitional Council, Major General Ahmed Saeed bin Brik, met on Sunday, at the Assembly's headquarters, with the Aden Youth Consultations team, in which the meeting discussed the education process, and the issue of education and the outcome of the educational process in all schools of the governorates of the South, and how to develop solutions that help and contribute to the advancement of the education process and its recovery from the situation it has reached recently.

At the meeting, which took place in the presence of Ms. Hanan Farea, deputy head of the General and Technical Education Committee in the National Assembly, and Marwan Abdullah Al-Shaeri, deputy head of the Martyrs and Wounded Committee in the Assembly, member of the team, Major General Bin Brik stressed the need to pay attention and devote all efforts to this sector, as it is one of the most important service sectors in which homelands are built by, and the nation is straightened with, and with its collapse, the present and the future collapse, so uneducated and conscious generation is born.

In the meeting, Chairman of the National Assembly, also stressed the need to strengthen the role of the teacher and to restore the prestige that it lost systematically by some parties that are hostile to the educational process.

Major General Ahmed Saeed referred to the successes achieved by the Education Support Fund in Hadramout governorate, and how that experience was transferred and applied in the capital, Aden, to improve and advance the status of education.

For his part, Aden Youth Consultations team expressed thanks to Major General Bin Brik, for his interest, and the leadership of the Southern Transitional Council represented by President Aidarous Al-Zubaidi, the President of the Southern Transitional Council, in the education sector, and for his efforts in overcoming the difficulties facing the team's work to improve the education situation.