Dr. Al-Khobaji holds extended meeting with administrative body and some members of the National Assembly

Dr. Al-Khobaji holds extended meeting with administrative body and some members of the National Assembly 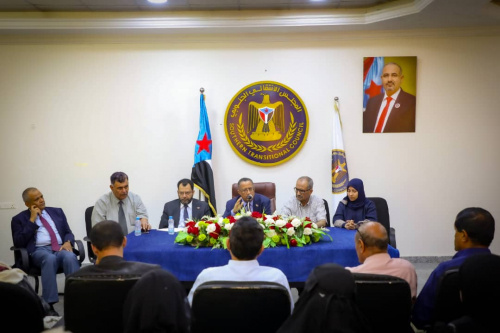 Dr. Nasser Al-Khobaji, Acting President of the Southern Transitional Council, Head of the Negotiations Affairs Unit, held on Thursday, an expanded meeting with the administrative body and a number of members of the National Assembly.

Dr. Nasser Al-Khobaji conveyed the greetings of the President of the Southern Transitional Council, President Aidaroos Al-Zubaidi, and presented to the attendees a detailed and comprehensive explanation of the Riyadh Agreement and the progress of the negotiation process before and after the agreement, stressing the need to proceed with the implementation of the remaining provisions of the agreement.

Dr. Al-Khobaji reviewed the results of the foreign visits of the Council’s leadership, and the efforts it is making to strengthen the relationship with the brotherly Arab countries, in a way that serves the people of the South and their national cause, stressing that the Council has good relations with many countries at the regional level.

Dr. Al-Khobaji indicated that there are continuous contacts with the diplomatic missions of the United States of America, the United Kingdom, and the Russian Federation, which the Council delegation headed by President Aidaroos Al-Zubaidi visited recently, and during which many parties met and produced important results, which will reflect its influence on the course of political action and the issue of the South during the coming period.

Dr. Al-Khobaji stressed: "We will not reach our goal except through concrete practical steps and our cohesion to build state institutions by a southern cadre, and infrastructures and others."

Dr. Al-Khobaji noted that the leadership has not and will not be satisfied that the people of the South live in suffering and distress of living with deteriorating conditions, stressing on striving to alleviate the suffering that burdens the southern citizens day after day.

At the end of the meeting, discussion was opened, in which Dr. Al-Khobaji responded to the questions, inquiries, and observations presented by the attendees, which mainly focused on the mechanisms and ways to raise the level of institutional work within the Southern Transitional Council system in particular, and what the southern arena is witnessing in general.