In presence of Al-Jaadi and Al-Kathiri ... Department of Information organizes its first consultative meeting for media centers

In presence of Al-Jaadi and Al-Kathiri ... Department of Information organizes its first consultative meeting for media centers 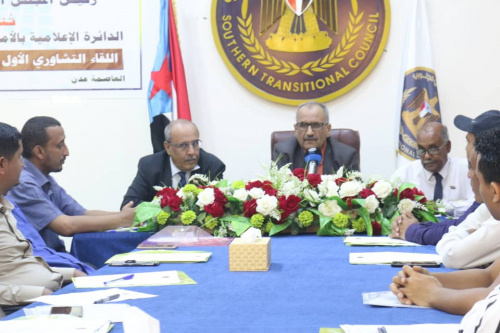 Mr. Fadl Al-Jaadi, at the inauguration, expressed his happiness to be present in this meeting, which reflects the interest in media and its great role at this stage.

Al-Jaadi stressed the importance of the media front that comes after the military front, and relies on it to keep pace with the military victories, to reinforce it and not to be broken.

Al-Jaadi talked to the participants by saying: "The media has provided a lot, and its staff sacrificed in the face of more than one opponent we face, and we are following your activities and reports, and we will listen to your recommendations in order to enhance our media and our activity, wishing you success in this meeting."

Mr. Ali Al-Kathiri also delivered a speech in which he emphasized, "This meeting is a good opportunity given the importance of media centers at this stage and to benefit from their rehabilitation to deepen understanding of the terminology and media trends that we are following."

Al Kathiri added: "We are fighting a battle to confront the forces that are mobilizing against the council and against the south, and our media has managed to win more than one battle, and we are now at a decisive stage, and through you we confirm that there are media professionals in the trench of confronting the forces that try to harm us."

Al-Kathiri continued, saying, "We count on the media to win every battle, and we stress the need to apply institutional work standards with high professionalism in this battle against the parties that are hostile to us," indicating that there are upcoming steps to develop the media of the Council in particular and the southern media in general to keep pace with development at this stage.

Dr. Abdullah Al-Haw, Head of the Information Department at the General Secretariat of the Presidency of the Southern Transitional Council, had opened the meeting with a speech in which he welcomed the attendees and indicated that this meeting aims to evaluate and review plans and review the vocabulary and terminology of the media discourse, especially with the stage of the Riyadh Agreement, and it will also include a space for exchanging views and to see the centers' plans, the difficulties they face, and how to overcome them.

The meeting reviewed report of the information department, which included the emergence of the media centers, their activities, and their achievements during the last period.

It was agreed at the end of the first day of the meeting to complete the discussion of the rest of the reports on the second day, in addition to preparing notes and proposals related to what was discussed to come up with appropriate recommendations to be considered and implemented during the next phase.