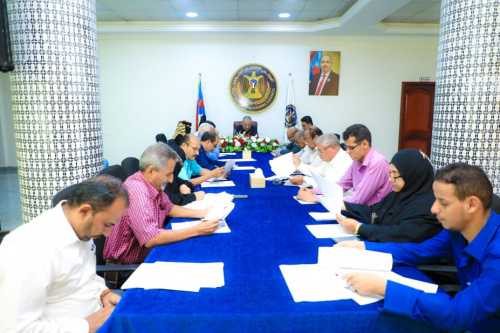 the General Secretariat of the Presidency of the Southern Transitional Council held on Monday, its periodic meeting headed by Mr. Fadl Mohammad Al-Jaadi, the Assistant Secretary-General.

The meeting reviewed the economic department’s performance report, which included the department’s activities and the most prominent economic issues it addressed during the last period.

The meeting also touched upon the displacement crisis, settlement and financing of displaced persons who are not within the standards and characteristics of the displaced, in addition to the importance of highlighting the aesthetic appearance of the capital Aden, and other issues related to southern affairs.

In another topic, the meeting requested the Celebrations Organizing Committee to expedite the presentation of proposals related to the celebration of the 53rd anniversary of the National Independence Day the 30th of November.

The meeting reviewed the completion reports of the activities of the General Secretariat departments during the past week, and the minutes of its previous meeting approved it.