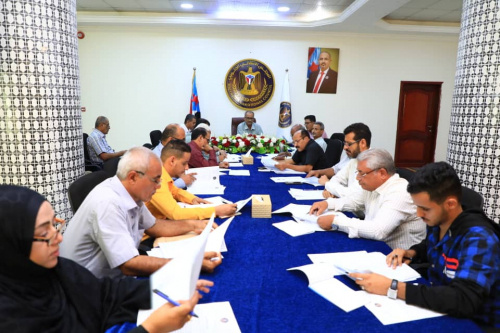 The meeting praised the role played by Mr. Ahmed Hamed Lamlas, the Secretary General of the Presidency of the Transitional Council, the Governor of the Capital Aden and Head of its Security Committee, to improve the economic, service and security conditions in the capital, stressing on the need to stand by him and help him to complete his duties properly.

The meeting pointed to the importance of the role of the security authorities in the capital, Aden, in dealing with security issues, and in rehabilitating, developing and arranging all security agencies, in a way that ensures the preservation of the stable security situation in the capital.

The meeting discussed the preparations for the ceremony of the 53rd anniversary of the glorious national independence "30 November", and the meeting directed the preparatory committee for the event to come up visions and proposals and submit them to the General Secretariat.

The meeting reviewed a report on the political scene submitted by the political department, which stressed on the importance of speeding up the implementation of the Riyadh Agreement, as it represents a real opportunity to bring peace and stability, and alleviate the suffering of our southern people and put an end to the extremism of the Brotherhood militia present in Shokra and its crimes against the citizens of Shabwa.

The meeting reviewed the reports of the weekly activity of the General Secretariat departments, in addition to a number of developments in the local arena, as well as reviewed and approved its previous minutes.