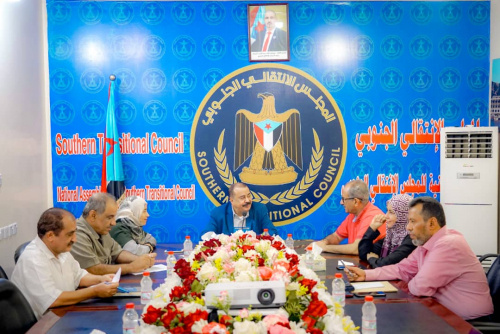 The Presidency of the Southern Transitional Council held on Sunday its regular meeting, headed by Major General Ahmed Saeed Bin Brik, the acting president of the council.

The meeting started by saluting our southern people who went out in the city of Al-Ghaida in the governorate of Al-Mahra and before in the city of Mukalla in Hadramout, Lahj, and Abyan governorates, in support of the decision of self-administration.

The meeting stressed that those large crowds in the governorates of Socotra, Lahj, Abyan, Hadramout and Al-Mahra have succeeded in delivering their messages to the interior, region and the world that the people of the south in all of their provinces support the Transitional Council and its leadership delegated by them to achieve

the aspirations of the south to restore its full sovereign state, manage its affairs and resources, stop tampering with it and direct it to address its service problems, which is the first practical steps for that.

The meeting discussed a number of topics on its agenda, including the progress of the political process and the efforts of the negotiating team led by President Aidaroos Al-Zubaidi.

The meeting affirmed its support for the efforts and position of the team based on the council’s desire to establish peace and establish security and stability in the southern governorates and its support for the efforts of the Kingdom of Saudi Arabia to reach to an agreement that stops the war and ensures the implementation of the Riyadh agreement and directing military capabilities to confront the Houthi militias.

The meeting also discussed the steps of the self-administration to pay the salaries of the military and security forces that the government deliberately obstructed, and the success achieved in reaching a consensus with the central bank to be paid them to their recipients hand by hand.

The meeting noted to some corrupt leaderships in the legitimacy who are trying to block the salaries of the employees of the Ministry of Interior, stressing on the necessity of delivering their salaries hand by hand for two months before the blessed Eid Al-Adha.

The meeting saluted the participants in the sit-in camp, including officers and members of the southern army and security, stressing on the importance of the role they played in highlighting the tragedy they and their families suffer as a result of the Yemeni government's intransigence in its deliberate cessation of their salaries.

The presidency praised the steadfastness of our fighters in the fronts of honor in Shokra, Al-Dhali, Karish, Al-Maisimeer, Therah, Al-Mahfed, Shabwa, Hadramout valley, and Al-Mahra, who line the most heroic stances in confronting the aggression of the Houthi militia and its terrorist elements, also praising the role of public security and the security belt to thwart those militias' plans to spread chaos and terrorism.