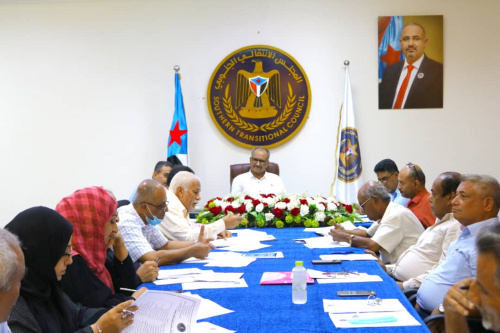 The General Secretariat of the Presidency of the Southern Transitional Council held on Monday, its weekly periodic meeting, headed by Mr. Fadl Mohammad Al-Jadi, the Assistant Secretary-General.

In the meeting, Mr. Fadl Al-Jadi, previewed the latest security and military developments on the southern scene, praising the steadfastness of the southern forces and their heroic sacrifices and attitudes on the battlefields to protect the homeland and to preserve the gains of the south.

Al-Jadi stressed on the necessity of protecting the media archive of the south, which has been neglected and looted, and exerting every effort to preserve it because of its historical and cultural value for the South.

Al-Jadi also stressed in the context of his speech on the importance of the credibility of the media speech, expressing his regret from some channels for not dealing professionally with the reality as it is, and publishing reports that do not reflect the reality of the Transitional Council’s relationship with the Arab coalition countries, especially with the presence of the Transitional Council delegation in Riyadh in response to the invitation of the brothers in the Coalition to discuss the implementation of the Riyadh Agreement with the kind sponsorship of the Kingdom of Saudi Arabia.

Al-Jadi stressed that the delegation of the Transitional Council in the Kingdom of Saudi Arabia expresses the hopes and aspirations of the people of the south and the southern issue with a steadfast stance that refuses to pass what may detract the people of the south and their just cause, indicating that there are false reports published on media outlets intended to intimidate the people and put pressure on the Transitional Council, but the Council leadership is firmly confident in its position and fully prepared to deal with all the circumstances.

The meeting discussed the report of the economic scene submitted by the Economic Department, which provided a full explanation of the economic situation that the people are suffering of due to the deterioration of services, especially electricity power and high oil derivative prices, in addition to the non-payment of salaries of the southern army and security, and the martyrs and the wounded, besides the high prices of goods and food, in which the self-administration has made efforts to deal with this situation, and face the challenges to overcome this difficult economic situation caused by the Yemeni government and its decisions.

The meeting reviewed the minutes of its previous meeting, the weekly activity report and the mandates related to the General Secretariat by the Presidency of the Southern Transitional Council.