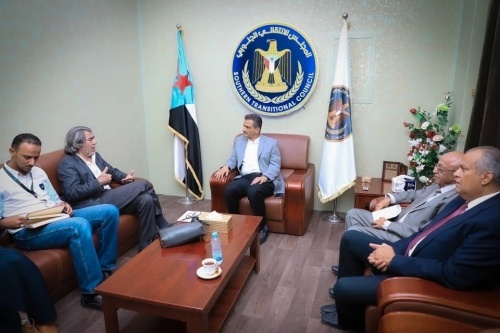 The Secretary General of the Presidency of the Southern Transitional Council, Ahmed Hamed Lamlas, received on Wednesday, in his office in Aden, Mr. Marwan Ezzat Al-Ali, Director of the Office and Advisor to the UN Envoy to Yemen, Mr. Martin Griffiths.

The meeting discussed a number of political issues related to the peace process, as well as the efforts of the United Nations and its envoy, Mr. Martin Griffiths, to resolve the crisis, end the war, and bring peace to Yemen.

The meeting reviewed the Riyadh Agreement and the artificial difficulties and obstacles facing its implementation for the purpose of prolonging the conflict and trading in wars.

The Secretary-General reaffirmed the Transitional Council's keenness and desire to find a peaceful political solution to the crisis in Yemen and to meet the aspirations and goals of the people of the South in their right to restore their full sovereign state.

For his part, Mr. Marwan Ezzat Al-Ali expressed his appreciation for the positive interaction of the Transitional Council with regard to the efforts made by the United Nations and Mr. Martin Griffiths to bring the views of the parties closer towards reaching a comprehensive political settlement that ends the war and stops conflicts and establishes lasting and sustainable peace and stability in the country.