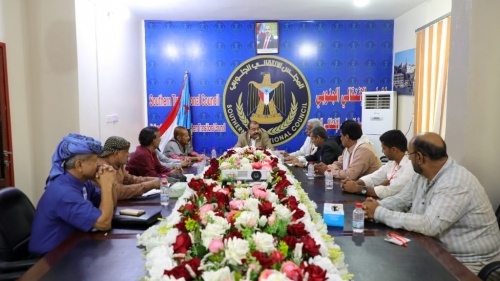 The meeting touched on the status of the south after the Riyadh agreement, as well as strengthening the southern home front.

The meeting stressed on the necessity of activating the role of the southern media to sow what is happening on the ground and the reality in a transparent manner to the citizens, and to discuss the unauthorized construction and the deployment on the southern lands, epecially in the capital Aden and the governorates of Lahj and Abyan, and the issue of the collapse of the local currency and its effects on the economic and living status of the citizens in the south.

The Chairman of the National Assembly reassured that all the negative behaviors that have appeared since 2011 and worsened more after the recent war on the south in 2015, will be eliminated soon by the force of law, stressing that the Transitional Council and its leaders are steadfast in what they have been promised to the people of the south, and will not give up a part of the lands of the south.