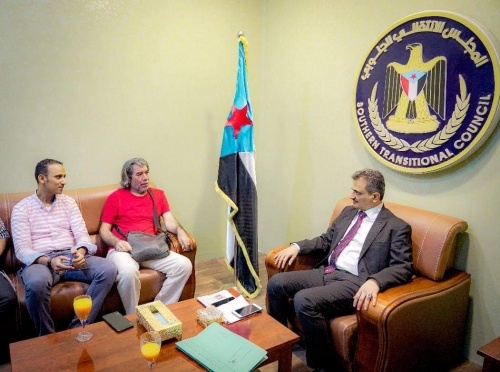 The Secretary General of the Presidency of the Southern Transitional Council, Mr. Ahmed Hamed Lamlas, met on Thursday at the General Secretariat, with Mr. Marwan Ezzat Al-Ali, Advisor of the International Envoy Mr. Martin Griffiths, and Director of the United Nations Office in Aden.

The Secretary-General discussed with Mr. Marwan Al-Ali the developments of the political and humanitarian situation at the local level, and the efforts of the United Nations to reach peaceful political solutions to end the war and the resulting humanitarian crisis in Yemen. They discussed also Jeddah dialogue and its importance in correcting the political process in Yemen.

Mr. Marwan Al-Ali stressed that the United Nations and the Special Envoy, Mr. Martin Griffiths, hope that Jeddah Agreement between the Transitional Council and legitimacy will lead to finding a suitable and appropriate ground to create the conditions and climate for the return and normalization of the people life, and to alleviate the suffering of the citizens, as well as to push forward the political process, in conjunction with the efforts of the United Nations for a comprehensive and just settlement, stressing also on the importance of signing the draft agreement and to be applied and the parties commitment to it.

For his part, Lamlas expressed his appreciation for the efforts of the leadership of the Kingdom of Saudi Arabia in sponsoring Jeddah negotiations and their keenness of its success.

Lamlas pointed out that the Southern Transitional Council was the most committed to calm and avoid military escalation, recognizing that dialogue is the best way to resolve all disputes and crises, stressing that the Transitional Council was and still deal with all responsibility and objectivity with all issues and files, assuring its keenness to address the situation to be corrected, as well as proving its seriousness and sincerity with the Arab coalition in its fight against the Houthi militias.