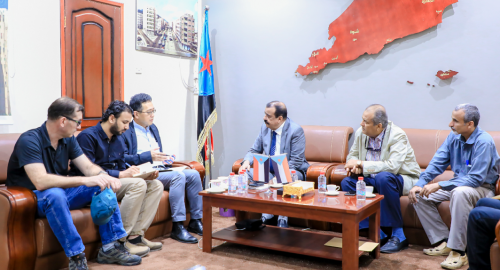 Chairman of the National Assembly of the Southern Transitional Council, Maj. Gen. Ahmed Saeed bin Brik, met on Saturday at the Assembly headquarter Masaki Watanabe, Deputy Director of Political Affairs of the Office of Mr. Martin Griffiths, the UN Special Envoy to Yemen.

The meeting discussed the latest developments in Aden the capital and the south in general, and the current steps in the political process, especially Jeddah consultations that called for by the Kingdom of Saudi Arabia between the Transitional Council and the government.

The Chairman of the National Assembly reaffirmed the support of the Transitional Council for all efforts made by the UN envoy to Yemen, Mr. Martin Griffiths, to achieve peace, and to reach a political settlement and a positive and just solution for the South.

He pointed to the interaction of the leadership of the Southern Transitional Council and its response to the call of Saudi Arabia to the dialogue and its commitment to calls for calm and stop military operations and field despite repeated violations by the military forces of the government of the Muslim Brotherhood wing represented by Islah party, and bringing terrorist elements to the provinces Shabwah and Abyan.

Ben brik reviewed the efforts of the Transitional Council to normalize life in all southern governorates in light of the obstacles caused by the so-called legitimate government to disrupt services to citizens and stopping the salaries of the armed forces and security.

For his part, Mr. Masaki Tanabe, Deputy Director of Political Affairs of the Office of the UN Special Envoy to Yemen, stressed that the dialogue of the Transitional Council delegation with the government organized by Saudi Arabia is very important not only for negotiations but also for citizens.

Mr. Masaki highlighted the UN's blessing and support for the dialogue in Jeddah and the importance of reaching positive results through it, in addition to supporting all efforts aimed at continuing the work of UN organizations and international organizations and providing services in all fields and normalization of life and not to prejudice the services associated with the lives of civilians According to international standards