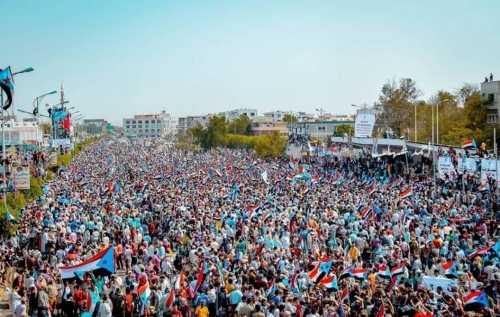 Hundreds of thousands of Southerners gathered today morning at the Freedom Square in Khormaksar of Aden the capital, in a mass rally called by the trade unions and civil society organizations, to support to the Southern forces and the Southern Transitional Council to establish security and protect the people and to combat terrorism by clearing Aden the capital from the terrorist elements.

Statement of the Persistence and Empowerment mass rally "Victory to the Will of the People of the South".

The great people of the South:

We are gathering Today in Aden the capital of the South, in the Freedom Square for the victory of the dignity of the South and its free national will towards the restoration of its independent sovereign state with its internationally recognized borders before 21 May 1990.

Our heroes people of the south:

We meet today to renew our pact and loyalty to the blood of all the martyrs of the South, and to declare our full support for the approach and positions of the Southern Transitional Council, headed by President Aidroos Al-Zubaidi, and for all steps and actions taken by the Transitional Council aimed at protecting the accomplishments and achievements of our people and safeguarding their rights, wealth and national capabilities, and accordingly we affirm the following:

What happened in Aden the capital recently was an inevitable result of the mentality of the Sanaa regime and its Houthi and terrorist forces and the failure and malpractice of the successive legitimate governments that have turned into a guillotine on the necks of the people since the liberation of the capital of southern Aden four years ago, and became a tool to hinder any efforts to normalize life and services, security and economic conditions, and the livelihood of the people .. Despite the efforts and generous support provided and still afforded by the Arab Coalition.

◼ We declare our support for what the southern resistance has done to protect the people and establish security and stability throughout Aden the capital as a necessary measure to clear Aden from terrorism and extremist elements.

◼ We request to His Excellency the President of the Southern Transitional Council and the leader of the Southern Resistance, President Aidroos Qasim Al-Zubaidi, who is popularly authorized by the historic Aden Declaration on May 4, to take his historical responsibilities that the people mandated him to within the framework of the South until the restoration of its independent state.

◼ We request the international community and the Arab coalition countries to hand over the southern administration to the southerners and their representative, the Southern Transitional Council, in order to manage the affairs of the south.

◼ We welcome and appreciate the responsible call from Saudi Arabia to hold a dialogue between the Southern Transitional Council and the legitimacy.. It is the act that we venerate and appreciate with respect and dignity.

◼ We stress on our people in all its segments on the importance of preserving the achievements and accomplishments of our southern resistance and not to give them up, and to preserve the private and public properties, and promot the spirit and values ​​of civic culture, peaceful coexistence, security and social peace.

◼ We commend the heroic role played by the southern national resistance for achieving the successes and brilliant victories we have today and we call on them to continue to clear the rest of the south from terrorism and occupation in Behan, Hadramout Valley, Mokeras and wherever found in our beloved south.

Mercy to the martyrs

Speedy healing of the wounded