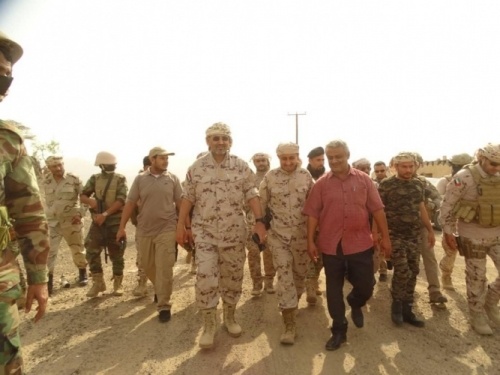 The President of the Southern Transitional Council, Supreme Commander of the Southern Resistance Forces, President Aidaroos Qasim Al-Zubaidi, along with the commander of the Arab Coalition forces in Aden the capital, Abu Mohammed, inspected the fifth Brigade Back-up and Support camp, as well as the training camp at Al-Raha region, and the tenth Thunderbolt Brigade in Al-Musaymir district of the governorate of Lahj.

In Radfan, President Al-Zubaidi and Commander Abu Mohammed was received by the Commander of the fifth Brigade Back-up and Support, Mokhtar Al-Nobi, who briefed the two leaders on the conditions of the camp.

President Al-Zubaidi praised the leadership, officers and members of the Fifth Brigade praising the victories achieved by the members of the brigade in the front of Kirsh against the Houthi militias, besides their role in preserving the security and stability of the citizens and fighting extremism and terrorism.

President Al-Zubaidi also praised the struggling role and sacrifices made by citizens of Radfan throughout history in the south, stressing that the Southern Transitional Council, will continue to fight the Houthi militias and will support the brothers in the Arab Coalition countries led by Saudi Arabia and the United Arab Emirates, for the Arab project to win, and the elimination of terrorism and extremism in all its forms.

President Al-Zubaidi and the commander of the Arab Coalition forces also inspected the camp of the 10th Brigade Thunderbolt, in Al- Musaymir district of Lahj governorate.

President Al-Zubaidi praised the level of preparation and equipping within the 10th Brigade, urging the brigade leadership and soldiers to exert more efforts in keeping the brigade ready in which it will carry out heavy tasks as a result of its strategic location  near the southern borders of Al- Musaymir and Kirsh.

President Al-Zubaidi and the leader of the Arab Coalition were accompanied in their visit by lawyer Ramzi Al-Shuaibi, head of the local leadership of the Transitional Council in Lahj governorate.