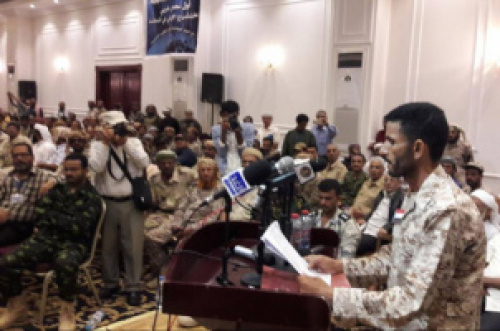 statement of the meeting of the "Southern Resistance Forces"

In light of the national responsibility imposed by the circumstances of the stage and the nature of the struggle at this moment of the history of our brave southern people, and the previous stages of struggle in which our people paid for their own blood for the freedom and dignity and salvation from the injustice and arrogance and indecency.

Our meeting today is an extension of the stages of the southern struggle and the rescue of our people from their suffering, the last of which was to confront with the Iranian militias and break the Persian project, where the southern resistance fought with the support of the Arab alliance in the battle of the nation, and it is characterized by heroism and victories in its battles against both the Houthis and the terrorist groups, which are the victories that cannot be denied.

Our southern people believed that by liberating its land from the Iranian Houthi militias, it could rid itself of long-suffering. Today, however, they suffer from another aspect of these militias, which caused unprecedented suffering on various levels related to public and service life, even in its simplest form. With regard to electricity, water, health, education or employment services, and the creation of severe crises in oil derivatives.

The critical moments and great suffering experienced by our southern people today, after a long history of struggle and sacrifices, necessitate every free and honorable south, leaders, individuals and people, to work together to stand courageously in confronting the intolerable danger caused by the government's persistence. The legitimacy and continuation of the policy of starvation, corruption and tampering and inability to address any of the files that concern our people as files (martyrs and wounded and salaries of employees and retirees and provide basic services and strengthen security and stability and normalization of life and the advancement of economy and living, reconstruction and start development) These rights exercised that government torture and sow differences and damage to the southern social fabric and creating the seeds of future conflicts policies.

The corrupt government has exploited the preoccupation of the heroes of the southern resistance in the fight against the Arab alliance against the Houthis and continuing on the border fronts as well as deep in the northern provinces with the belief of the southern resistance to achieve the lofty goals of the Arab alliance, to continue that government in its guise and to starve our people and their repeated suffering, and bringing them to the edge of the disaster of hunger and famine, and death.

Our southern people have been very patient, they have repeatedly warned the southern resistance, have resorted to restraint and have been flexible in the face of what the legitimate government is doing, but that is no longer useful, with the arrogance of the government, which has not been fed up with the fate of its predecessors who accused the south of being loyal to Iran. This is what is happening with the legitimate government, which is infiltrated by suspicious relations with Iran and Qatar, which is trying to legitimize the settlement of its accounts with the countries of the Arab coalition and the region by targeting the southern forces of the country, which defeated the Iranian militias and broke its aggressive Persian project in the south.

The southern resistance, which confirms that the blood of the martyrs of the south, which continues to irrigate the land until this moment, on all fronts of the fighting, including the northern fronts, is safe in the neck and cannot allow anyone to bypass or cancel it, the sacrifices made by the southerners, in the liberation and independence and the restoration of this state, which fought for a long time, and in support of the objectives of the Arab alliance and not to re-rotate the forces of corruption and tampering and re-production again.

Therefore, the southern resistance, with full responsibility, and at a defining moment in the history of our southern people, affirms the revolutionary action in protecting the historical gains of our people, enhancing its security and stability, the security of the region in general, preserving its social fabric, protecting its political options and achieving its legitimate aspirations,

Second: The southern resistance forces declare a state of emergency in the capital Aden and begin the procedures to topple the legitimate government and replace it with a government of national competencies, based on determinants and fundamental and legitimate reasons, to save our people from the hell of disaster and the death that is led by that corrupt government.

Third: The southern resistance forces reject any military activity of any northern armed forces on the land of the south or northern officials, whether inside or outside the legitimacy, while confirming and supporting any Northern Forces led by the alliance to confront al-Houthi to liberate the north from this rogue gang because its survival poses a danger to our beloved south and to regional and national security.

Fourth: We, the Southern Resistance Forces, reaffirm our full commitment to receive displaced civilians from our northern brothers and provide them with all protection and humanitarian assistance in accordance with United Nations laws, while emphasizing the right of the security services to carry out their routine duties to protect security.

Fifth: The Southern Resistance forces call on their forces throughout the regions and cities of the south to be fully alert and prepared for any emergency and to strengthen the border fronts to defend the south and secure vital places.

Sixth: We call on our southern people with all its revolutionary and living forces and social components to quickly align themselves with the southern resistance forces and march to the capital of Aden, especially the southern unions, student unions and its academic, scientific and social constituencies

Seventh, we call upon our brothers, officers, soldiers and leaders of all the southern military and security units to assume the southern national responsibility and awareness of the sensitivity of the stage, stand in the ranks of their parents and brothers and their sons and the required honorable national positions along with our southern people and call them not to comply with any orders that would break the southern, or confront our people or shed any drop of blood on the land of the South.

Eighth: We call upon his excellency President Hadi to listen to the voice of reason and to preempt our struggle with the legitimate government and to avoid the situation by sacking the Bin Dagher government and putting it on trial for crimes against our southern people.

We will give his excellency President Hadi a full week and then we will begin our proceedings.

Ninth: The Southern Resistance Forces affirm their adherence to Aden historical Declaration with their full support for the Southern Transitional Council and confirm that it stands behind it as the political representative of the people of the south and its cause.

Tenth: We affirm our full support for the Arab alliance in achieving its best and full objectives against the Iranian Houthi militias, and we will stand with it until victory.