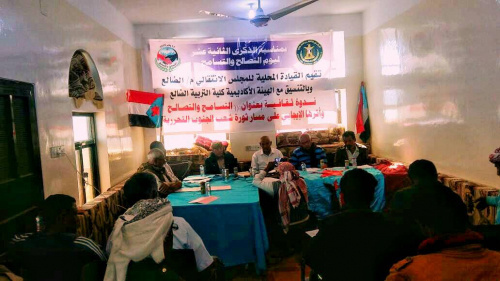 The local leadership of the Southern Transitional Council (STC) in Al-Dhali governorate, represented by the Cultural Department of the Council and in coordination with the Academic Authority of Al-Dhali Faculty of Education,  organized a cultural symposium entitled "Reconciliation and Tolerance with its Positive Impact on the Path of The Liberation Revolution for The People of South" on the occasion of the 12th anniversary of the Day of Southern Reconciliation and Tolerance.

The symposium started with an opening and welcoming speech delivered by the Head  of STC in Al-Dhali - Brigadier General\ Abdullah Mahdi Saeed, during which he presented the importance of the principle of reconciliation and tolerance and its historical roots for the past, present and future, praising the start of Radfan Society, stressing on the role of Al-Dhali in building and preparing the launch of this supreme principle. He also stressed that the leading and political elites must adhere to this great principle for its consequences to enhance the role towards the liberation goals and the independence project.

The meeting was concluded by the speech of Brigadier General\ Abdullah Mahdi, who stressed on the need for a community dialogue with all parties to come up with opinions and proposals that reinforce the principle of participation in drawing and shaping the present and the future for building the state.

The seminar was attended by a number of heads of departments, members of the STC, political activists and interested figures.