Al Zubaidi Delivers a Historic Speech to the People of Hadhramout

Al Zubaidi Delivers a Historic Speech to the People of Hadhramout 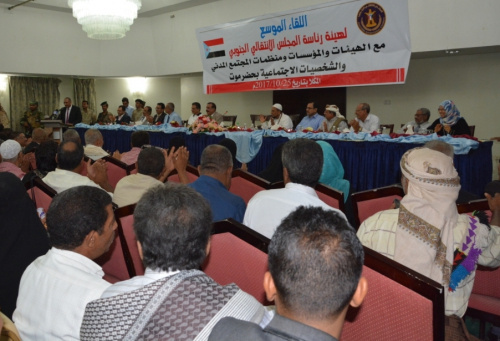 The Chairman of the Presidency of the Southern Transitional Council Qasim Al Zubaidi, has addressed the people of Hadhramout today, in his speech he emphasized their right to express their will and grasp their rights and extend their control over their land, he also thanked and appreciated the Arab coalition led by the KSA and the U.A.E. for their great role in supporting the southern people.

During his meeting with the leaders and heads of the social organizations, the public sector directors and public figures in Hadhramout Al Zubaidi thanked the people of Hadramout past and present saying , ’Hadramout, which was a state in the past and will remain so in the future with the blessing of God’. We would like to thank and people of Hadramawt on their hospitality and welcoming us because this is the characteristic of the brave Hadhrami people. He explained the reasons for the formation of the Transitional Council and its objectives which the STC wants to achieve at completion of forming all the national assembly branches in the southern governorates. These achievements are a result of the sacrifices of the people of the south throughout the years since 1994 till today adding that the formation of the STC is not a result of the dismissal of the governors by the legitimate government assuring that the STC is here to stay.

Al Zubaidi said that the STC was formed based on two main pillars one the people of the south and two Hadhramout, assuring that since the first moments of forming the STC the contact with previous  governor of Hadramout , Ahmad Saed Bin Berek, has been constant in the aim to create a united southern entity.  He stressed that the South without Hadramaut cannot be complete, Hadramout has a history and a civilization and it is mentioned in the holy Quran so no one can ignore the importance of Hadramout.

On the other hand major general Al Zubaidi saluted the special ‘Al Nokhba Al Hadhramih’ elite forces and hailed them, describing them as the future army of Hadhramout to protect it and safeguard it under the leadership of major general Faraj Salmeen Al Buhseni. He said we are looking forward to having a Federal state for the southern governorates where each is accountable for its administration, with the elite forces controlling all Hadramout including the Valley. Assuring that the Transitional Council will support whenever required specially in fighting the occupation forces or in fighting terrorism.

On is part major general Ahmad Bin Berek said that the people of the South are the owners of the land and that the council's representatives and southerners collectively carry the burden of the south on their shoulders till they fulfill their goal for a sovereign southern state.