Ben Berek: The STC will be Partners with International Organizations

Ben Berek: The STC will be Partners with International Organizations 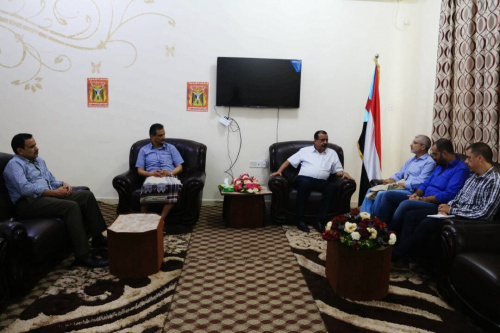 Member of the presidium of the Southern Transitional Council Ahmad Sead Bin Berek , met at the council’s headquarters in the capital Aden the delegation of the International Committee of the Red Cross, chaired by Mr Carlos Petais.
At the meeting, which was attended by a member of the Presidency of the Council Ahmed Hamid lamals and Abdullah Salem Alsuqatri, major Ben Berek welcomed the delegation in the name of the presidency members and its president Aidros Al Zubaidi .

At the meeting  he valued the active efforts and contributions of  the international organization in providing humanitarian assistance to the needy in areas of war and conflict, and stressed the readiness of the Southern  Transitional Council to contribute to overcome difficulties and enable the organization to implement its  humanitarian projects.
Major general Ben Berek, called through the international bodies to the Houthis to release the southern prisoners and detainees including defense minister Major General Mahmoud Subeihi, major general Nasser Mansour Hadi, brigadier general Faisal Rajab and captive Ahmed Almrkshi

Ben Berek also assured the delegation that  the Southern Transitional Council aims to  strengthen the relationship and partnership with various humanitarian and international organizations under the directives of the STC presidium  regarding humanitarian development and service during the next period, where the South will witness several events and activities within the program of the council following the inauguration of the STC’s branches  in the provinces and districts.

Major general Ben Berek, also reviewed the role of the STC and the elite forces and the security belt in the fight against terrorism in all its various forms and confronting  Al-Qaeda remnants in Aden , Hadhramaut and Shabwa and  all areas of the South as an active partner with the international community in combating terrorism.
Members of the STC lamals and Al Suqatri , called on the need for the International Committee of the Red Cross and international organizations in the southern governorates to raise citizens ' awareness of the risks and how to reduce this phenomenon, which is a threat to peace and  social security .

On his part director of the subcommittee of the International Committee of the Red Cross in the capital Aden Carlos, gave detailed explanation on the activities and programs of the Commission during the next period in the southern governorates, and ways of providing humanitarian aid. 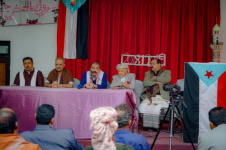