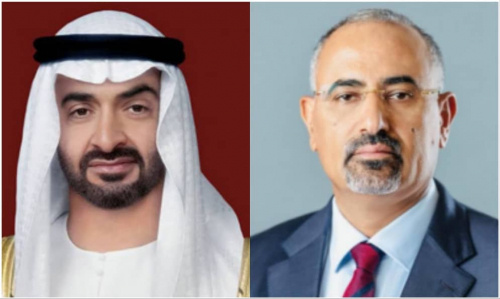 President Aidaroos Qassem Al-Zubaidi, President of the Southern Transitional Council (STC) and deputy head of the Presidential Leadership Council (PLC), offered a cable of congratulations to his official brother, His Highness Sheikh Mohammed Ben Zayed Al-Nahyan, President of the United Arab Emirates(UAE), Supreme Commander of the Armed Forces, and their Excellencies and Highnesses, Rulers of the Emirates, on the national occasion of the 51st anniversary since the establishment of the UAE on the 2nd of December, "The UAE's Union Day", and the Emirati Martyr's Day, on the 30th of November.

The complete congratulatory cable as follows:

President of the United Arab Emirates, Supreme Commander of the Armed Forces,

Their Highnesses and Excellencies, Rulers of the Emirates

It is an immense pleasure, on my own behalf, and on behalf of the people of the South, both at home and abroad, to offer you the warmest congratulations and the sincerest wishes, and through you to the brotherly Emirati people, on the national occasion of the 51st anniversary of founding of the United Arab Emirates on the glorious 2nd of December 1971, and the Emirati Martyr’s Day, on November 30.

Gentlemen, Your Highnesses and Excellencies

While we congratulate you on these two great occasions, we proudly and reverently appreciate the grand achievements of the UAE at all levels, the prosperity and development fulfilled to its people, and its par excellent role in consolidating the principles and values ​​of tolerance and fraternity, since its establishment that were laid by the founder of the Union, the late Sheikh Zayed Ben Sultan Al Nahyan, may Allah bestow His mercy on him,

On this great national occasion, we cannot miss the chance to reiterate our deep gratitude to the UAE government and people, for the heroic and humane positions with our country in light of the exceptional circumstances that it has been passing through it, and that is what was embodied in the pure blood of the vigilant soldiers of the UAE Armed Forces whose souls ascended to the Creator on the unstained soil of our South for the sake of the liberation of the land and the expulsion of the brutal invaders, in addition to its relief and humanitarian aid, and the constant support to push the wheel of development in many different fields, affirming that incessant support, and all those ultimate sacrifices by the heroes of the UAE, will definitely be remained a source of pride and a medal of honour for the UAE, the Arab and Islamic nations.

Wishing the leadership of the UAE constant good health and happiness, and to the brotherly people further prosperity, progress, and stability, under the wise-led steps of your leadership, praying to Allah, the Almighty to abode your/our martyrs in His paradise with the prophets, the truthful, the martyrs, and righteous. And excellent are those as companions!