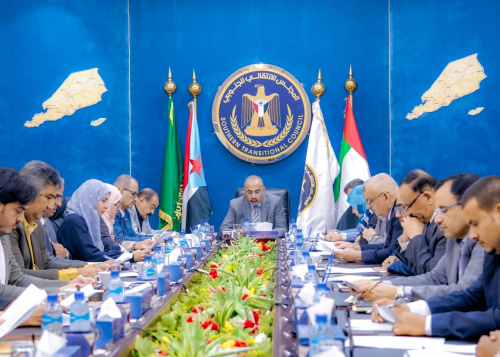 The Presidium of the Southern Transitional Council (STC) held its periodic meeting, on Saturday, chaired by President Aidarous Qassem Al-Zubaidi, the president of the STC.

Presidium, in its meeting, which was attended by the Secretary General of the Presidency of the STC, Minister of State, Governor of the Capital, Aden Mr. Ahmed Hamed Lamlas, and several ministers of the STC in the power-sharing government, reviewed the latest developments in the governorates of the South in light of a report submitted by the Decision Making Support Center, which included the most prominent political developments; the military, security, and economic issues that concern the people of the South, and a set of recommendations to deal with such challenges.

In the meeting, the Presidium continued focusing on the escalating mass movement in districts of Almahra Governorate and Hadramaut Valley areas, to demand the transfer of the forces of the North positioned there to the confronting fronts with Houthi militias, in accordance with the requirements of al-Riyadh Agreement.In the same context, the Presidium has lauded the escalation of the mass nonviolent movement, reaffirmed its support and back of the legal demands of the people of Almahra and Hadramaut Valley, and the accrued-right to manage and secure their governorates with troops from their own people.

In another context, the Presidium applauded the great victories achieved by the heroes of the southern armed forces in the operations of Arrows of the East and the South against terrorist and extremist groups in the governorates of Abyan and Shabwa, affirming that the ultimate sacrifices made by the heroes of our armed forces will definitely remain a source of pride for the leadership and people of the South.

The Presidium, too, focused on the educational process in all governorates of the South, its deteriorating situation due to accumulating corruption, and inadequate inspection of the education offices in the governorates. In this respect, the Presidium has called upon the power-sharing government and governors of the governorates to take the appropriate measures to rectify the situation in education, foremost of which is changing corrupted directors and managers, intensifying inspection, paying visits to schools, reviewing performance and orientations of private schools.

The Presidium touched on the smuggling operations that occur at sea ports in the coastal strip extending from the capital Aden to al-Mandab Strait, calling on the government to expeditely enable the revenue-producing state institutions to extend control over those ports and enforcing law application to control smuggled goods and combat the smuggling of prohibited materials.

To the end of its meeting, the Presidium shed light on the continuous intruding on public open spaces, either in residential complexities or in flow sheet planning, stressing that the local authorities in the governorates should assume their responsibilities and play a key role in stopping those intruding actions, arresting trespassers and encroachers, and remitting them to the judiciary.