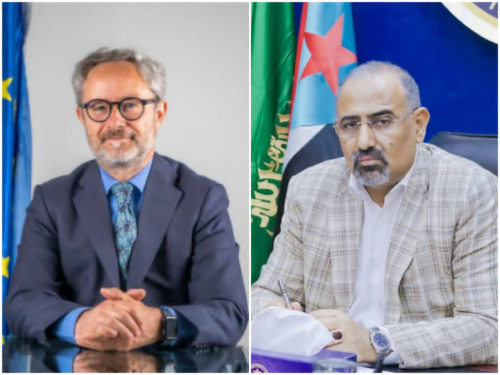 President Aidarous Qassem Al-Zubaidi, the president of the Southern Transitional Council (STC), and deputy head of the Presidential Leadership Council (PLC), discussed ways of supporting the European Union for the PLC and the UN endeavours to bring peace to Yemen.

It took place when the president Al-Zubaidi, on Monday, met, via video call, with the Ambassador of the European Union to Yemen, H.E. Gabriel Monera Viñales, as they have discussed the ways and mechanisms for supporting, strengthening and consolidating the efforts of the PLC aimed at reviving the economy, reforming state institutions, maintaining security and stability, and establishing peace.

The meeting touched on the latest developments in the military situation in the governorates of Abyan and Shabwa, and the efforts of the armed forces in combating terrorism with launching the military campaign "Arrows of the East", as the EU ambassador expressed his sincere condolences to President Al-Zubaidi and the families of the martyrs of the Security Belt Forces who fell in the terrorist attack that targeted their picketes position in Ahwar district last week.

In the meeting, the president emphasized on the pivotal role being assumed by the EU to support humanitarian and development efforts and the endeavours of the comprehensive political process in Yemen, reiterating his demand for the international community and the UN to put more pressure on the Houthi militias and pushing them ahead to implement their obligations towards the UN truce.

The president affirmed that the future of the truce is perilous in light of the intransigence of the Houthi militias and their disrespect and disavowal from fulfilling the commitments, and evading the implementation of the terms and provisions of the truce; furthermore, their continuous targeting of defenceless civilians, blocking roads, crossings, and military mobilization in most areas, in addition to jeopardizing international navigation in the Red Sea and threatening international peace and security.

For his part, Ambassador Viñales affirmed the support and assistance of the EU to the PLC, and the endeavours of the Special Envoy of the Secretary-General of the UN to Yemen, Mr. Hans Grundberg, to promote peace process and end the conflict in the region.

The meeting was attended by Mr. Anis Al Sharafi, Head of Political and Planing Affairs in the General Directorate for Foreign Affairs (GDFA) of the STC, and Mr. Imad Mohammed, office director of the deputy head of the PLC.