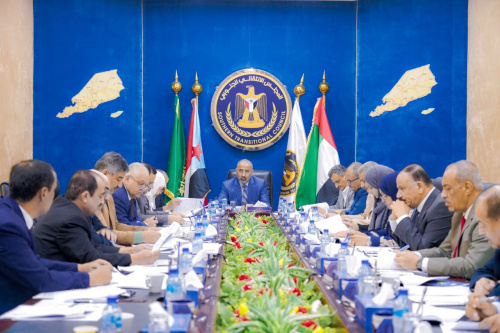 The Presidium of the Southern Transitional Council (STC) held its periodic meeting, on Saturday, chaired by president Aidarous Qassem Al-Zubaidi, the president of the STC.

The Presidium in its meeting which was attended by the Secretary General of the Presidency of the STC, Minister of State, Governor of the Capital, Aden Mr. Ahmed Hamed Lamlas, several ministers of the STC in the power-sharing government and the committee for restructuring the STC's bodies, upgrading and updating its organizational structure, reviewed the draft submitted by the restructuring committee, regarding amending and approving the statute of the STC, which is the highest organizational document, after discussing and assimilating remarks made by the members of the STC's Presidium.

In a separate context, the Presidium listened to a report on the overall endeavours of head and team of the Internal Southern National Dialogue Team (ISNDT), and the outcomes of the meetings held with the components, national forces and southern political and social figures both at home and abroad, lauding the team’s important achievements in this aspect, emphasizing the need to continue dialogue with labour and professional unions and syndicates, and various social communities to listen and get benefit of their opinions and remarks in the dialogue with the different national forces.

The meeting lauded the positive interaction of southern forces, components and personalities, with President Al-Zubaidi's call for dialogue, affirming that this reflects the national responsibility assumed by those components, forces and southern national figures, and their keenness to strengthen national cohesiveness, and uphold the high interest of the south.

In its meeting, the Presidium, too, reviewed the most prominent political and military developments in the governorates of Abyan, Shabwa, Valley of Hadramaut and Almahra, the Presidium of the STC expressed its condemnation and denunciation of the treacherous terrorist operation targeted the Security Belt Forces in Ahwar district, the governorate of Abyan last week. At the same time, it has commended the valiancy of the Security belt forces in counteracting and eliminating the terrorist elements that attacked the security checkpoint.

To the end of its meeting, the Presidium reiteratedly applauded the popular movement in the Valley of Hadramaut and Almahra districts, and demands of the people of those areas to manage the military and security affairs of their governorates and simultaneously cautioned against cracking down those peaceful mass demonstrations, reaffirming to support and assist the people of the Valley of Hadhramout and Almahra in their endeavours and peaceful uprising to take their legal rights.