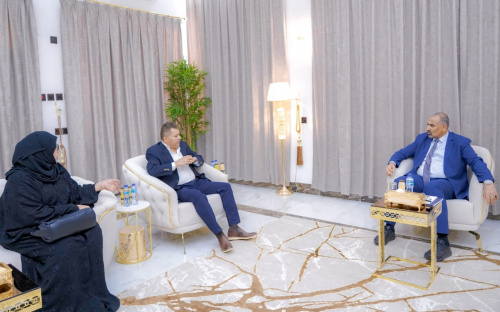 President Aidarous Qassem Al-Zubaidi, the president of the Southern Transitional Council (STC), Deputy head of the Presidential Leadership Council (PLC), on Saturday, at his office, in the capital Aden, met with Judge Qaher Mustafa, Public Prosecutor.

In the meeting, which was attended by Judge Sabah Alwani, a member of the Supreme Judicial Council, President Al-Zubaidi listened from Judge Qaher Mustafa to a satisfied explanation on the workflow of the prosecution offices in their various jurisdictions, and highlighted the difficulties encountering the work of the prosecution and the judiciary, in general, and the possible ways to solve such challenges.

During the meeting, President Al-Zubaidi was, too, briefed on the efforts being made to reform the judiciary, stressing the need to provide it with efficient, and well-qualified cadres, to inflict the punishment and deterrence on convicted criminals and the return of rights to their owners.

At the same time, the president affirmed the support and assistance of the PLC to Public Prosecutor and the Supreme Judicial Council, and its readiness to ease any difficulties that hinder the progress of their work, so that they can perform their tasks in

For his part, Judge Qaher Mustafa expressed his thanks and appreciation to President Al-Zubaidi for the attention he pays to the prosecution and the judiciary, in addition to his keenness to overcome any encountered difficulties