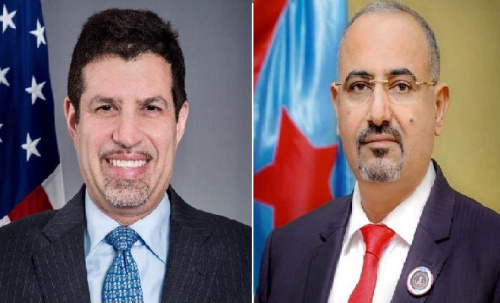 In the meeting, the latest developments in the liberated governorates were reviewed, in amid of Houthis frequent breaching of the UN truce, continued mobilization of troops in Taiz and Hodiedah, blocking crossings, and blasting the bridges that connect Abyan and Albayda governorates.

President Al-Zubaidi has called for the United States of America and the international community to have a clear vision of the frequent violation and escalation by Iran-backed militias, affirming that they are exploiting the UN truce to re-arrange their efforts in a preparation to wage war both to seize the oil areas and insecure the international maritime ways in the Red Sea, and al-Mandab Strait.

The president, too, reiterates his demand for the USA to support the PLC, the power-sharing government, and the southern armed forces, which can break the arrogance of Houthi militias, and confront their conspiracies, noting that Houthis will never abandon their expanding intentions unless there is a deterrent force against those militias.

For his part, ambassador Fagin condemned Houthis' attack on the sole crossing that connects Taiz and Aden, highlighted what the militias have done in Taiz as a flagrant breach of the UN truce, assured on supporting the PLC, consolidating the harmony among its members, assisting the power-sharing government to assume its responsibilities to all citizens as the proper way to counteract the expansionist Iranian-Houthi projects.

The meeting touched on the latest  developments in the two governorates of Abyan, and Shabwa, and efforts of the PLC to stabilize the situation, maintain stability and security in the liberated governorates, further to the endeavours of the power-sharing government in completing the required reforms to expedite receiving the pledges provided by the official brothers in the Kingdom of Saudi Arabia and the United Arab Emirates to revive the deteriorating economy, as well as the US support to provide logistics and assistance  to build the capacity of the security and Coast Guard forces.