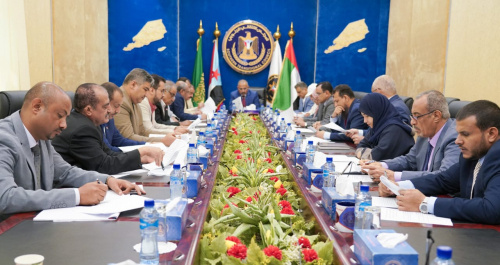 The Presidium in its meeting which was attended by several ministers of the STC in the power-sharing government and Mr. Fadi Ba'um, Head of Political Bureau of Revolutionary Movement Council (RMC), the president Al-Zubaidi welcomed the head of the political Bureau of the RMC, who arrived in the capital Aden last week, affirming to continue the incessant efforts aiming of consolidating the southern cohesiveness, strengthening the principles of tolerance and reconciliation, and coordinating joint action with the various forces having a deep-rooted belief in the right of restoring the State of the South.

For his part, Head of Political Bureau of the RMC offered thanks and appreciation to the president Al-Zubaidi on such tireless efforts to achieve the southern cohesiveness, gather the southern diaspora, and strengthening national cohesion and the social fabric.

In a separate context, the STC's Presidium stood before the suspicious military movements by certain forces implementing the agendas of the Muslim Brotherhood and Houthi militias in Al-Mahra governorate, foremost of which are mobilizing armed groups from different districts in at attempt to form a settlement under the pretext of displacement, smuggling weapons to plunge chaos and violence into the governorate and disturbing the public tranquility, in this respect, the STC's Presidium has reiterated its rejection of assigning any security or military tasks to elements not belonging to the governorate, affirming its support and assistance of enabling the people of Al-Mahra to manage the military and security affairs of their governorate.

The Presidium has, too, focused on the latest developments in the military campaign of "Arrows of the East" that launched as per directives of the President Aidarous Qassem Al-Zubaidi, the President of tbe STC, the Supreme Commander of the Southern Armed Forces, to clearse the governorate of Abyan of the terrorist elements, followed by deploying the security troops and assigning by the security service backed by Abyan Axis Forces for the past three days, lauding the grand success achieved in this campaign as well as the level of cooperation and immense efforts made by the command of the forces participating in this campaign, notably security director of Abyan, colonel Abu Masha'l Al-Kazimi, colonel Adbul-Qader Al-Ga'rubi, sheikhs, dignitaries, notables, and social personalities in the governorate.

At the same time, the meeting touched on the latest developments in Shabwa governorate, as the Presidium of the STC has lauded the efforts led by the governor of the governorate sheikh Awad Ben al-Wazeer Al-Awlaqi to normalize the situation. Furthermore, it has cautioned of continuing the mobilization process by the militias of Muslim Brotherhood rebelled on the legitimacy in A'aryn Brigade adjacent to Al-Auqla oil area.