President Al-Zubaidi Gets Briefed on Latest Developments in Lahj Governorate

President Al-Zubaidi Gets Briefed on Latest Developments in Lahj Governorate 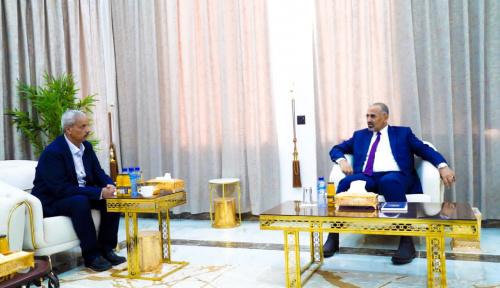 In the meeting which was attended by Security Director of Lahj, major general Saleh Al-Sayed, the president Al-Zubaidi listened from major general Al-Turki to a satisfied explanation on the general developments in Lahj governorate,

the ongoing efforts of the local authority and the encountered difficulties and challenges.

The president Al-Zubaidi was, too, briefed by the governor Al-Turki on outcomes of the governmental team who paid visit to Yafe'a districts, and the positive reverberations of such visit at the popular level, in the same context, urged the local authority to coordinate with the government to pay visits alike to other areas of the governorate and inspect concerns, requirements, and troubles of its people and to do the best to get the required solutions.

The president affirmed the vital importance that Lahj governorate enjoys with the STC and the PLC, as the strategic depth of the capital, Aden, in the same context, emphasized the need to intensify efforts in the upcoming stage with regard to strengthening the economic aspect and implementing  infrastructure projects, by providing attractive investment opportunities, since Lahj, in particular, has all the sustainable resources for the success of agricultural and industrial investments.

The president expressed the readiness of the PLC to provide all aspects of support to the local authority in the governorate, and to ease any difficulties encountering its work to ensure achieving the assigned tasks, and fulfilling a paradigm shift whose impact could positively and immediately be felt by all citizens of the governorate.

For his part, the overnor Al-Turki expressed his thanks and appreciation to the president Aidarous Qassem Al-Zubaidi for the high interest he attaches to Lahj governorate, and his constant keenness to be familiarized with its conditions and solve the troubles of its people, affirming the readiness of the local authority in the governorate to mobilize all efforts and potentialities to progress and develop the conditions of the governorate to fulfill the best.