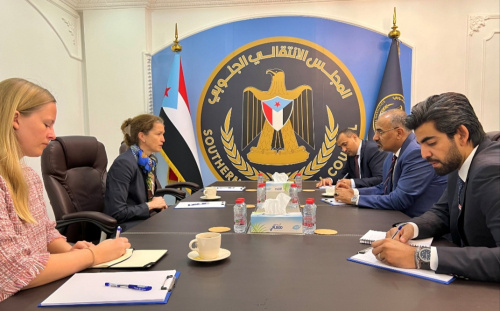 The President of the Southern Transitional Council, Supreme Commander of the Southern Armed Forces, President Aidarous Al-Zubaidi, received on Tuesday, in the UAE capital, Abu Dhabi, the envoy of the Kingdom of Norway to Yemen, Ms. Charsty Tromsdale.

In the meeting, President Al-Zubaidi discussed the humanitarian and economic conditions in the liberated areas, stressing that the people live below the poverty line, calling on the Kingdom of Norway and the regional and international community to support the economy and play an active role in alleviating the people's burdens.

President Al-Zubaidi praised the role of the Kingdom of Norway in supporting the humanitarian situation and its political endeavors in supporting the efforts of the United Nations and its Special Envoy to Yemen, and its efforts in the UN Security Council.

President Al-Zubaidi reviewed the efforts made to complete the implementation of the Riyadh Agreement, praising the incessant efforts made by the  leadership of the Kingdom of Saudi Arabia and the United Arab Emirates to push for the completion of the implementation of the agreement, and stressed the need to integrate efforts to complete implementing the agreement, foremost of which is completing appointing governors and security directors for the governorates of the South, and transferring military forces from Hadramout valley and Al-Mahra to the frontlines of confronting the Houthi militias.

President Al-Zubaidi reiterated the position of the Southern Transitional Council in supporting the government of power-sharing between the south and the north, and the efforts of the envoy of the Secretary-General of the United Nations to Yemen, stressing the importance of designing a comprehensive peace process that ends the conflict in the region, in which the Southern Transitional Council is a pivotal partner of, and the issue of the people of the South is one of its most important priorities.

President Al-Zubaidi condemned terrorist practices of the Houthi militias and their blatant attacks that target the security of the region and threaten international peace and security, by targeting civilians, places, and civilian facilities in the Kingdom of Saudi Arabia, the United Arab Emirates, and the capital, Aden, and other governorates of the South, as well as their terrorist piracy operations in maritime waters and their ongoing threats to international maritime operations through the Red Sea.

For her part, the envoy of the Kingdom of Norway expressed her country's aspiration to stop the war, bring peace, achieve stability, and start a comprehensive political process that accommodates all issues and parties, expressing her country's full support for the efforts of the Special Envoy of the Secretary-General of the United Nations to Yemen.

The meeting was attended by Amr Al-Bidh, member of the Presidency of the Southern Transitional Council, and Anis Al-Sharafi, Head of the Political Affairs and Planning Department in the General Directorate of Foreign Affairs, and from the Norwegian side, Helen Sigmund, the Second Secretary at the Embassy of the Kingdom of Norway to the United Arab Emirates.