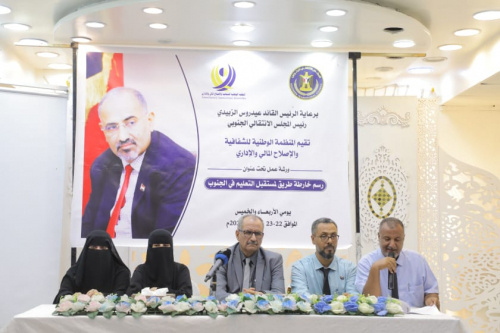 Mr. Fadl Mohammad Al-Jaadi, Deputy Secretary-General of the General Secretariat of the Presidency of the Southern Transitional Council, inaugurated on Wednesday, a workshop held by the National Organization for Transparency and Financial and Administrative Reform, under the auspices of President Aidarous Al-Zubaidi, the President of the Southern Transitional Council, under the title "Drawing a road map for the future of education in the South".

Al-Jaadi pointed out that education today no longer obtains the same importance, as most teachers are now working for little money, and the student recently no longer finds in education what is equivalent to what students received from education in the South before.

In the workshop, in which Al-Jaadi was honored by the National Transparency Organization for his national and educational efforts, he stressed the need to restore the Southern patriotic spirit to advance education, hoping that this workshop would produce recommendations and outputs on which to build a modern educational curriculum that would be a positive product for future generations.

The workshop included a presentation on the efforts made to combat corruption and lay solid foundations for the southern state institutions to extricate the south, and the educational system in particular, from what it has been exposed to by Sana'a regime.

On the first day of the workshop, a speech for the Southern Teachers and Educators Syndicate was delivered about the conditions of teachers, their role and importance,

A number of working papers were presented in the workshop on the problems facing education in the south and their related factors, in which the participants discussed these issues and ways to resolve them.

The inauguration of the workshop was attended by Ms. Ishtiaq Mohammad Saad - Director General of Women's Development in the capital, Aden, Head of the Women and Child Department in the General Secretariat, Mr. Aad Mohammad Ali Haitham, Head of Social Affairs Department in the Secretariat, as well as Mr. Abdul Rahim Jawi, current Director General of the Mualla district and former director of the Office of Education in the district, and officials from the educational unions, the curriculum administration, in addition to a group of teachers, educators, students and representatives of civil society organizations.