President Al-Zubaidi: Practical solutions must be found to help stabilizing the currency value

President Al-Zubaidi: Practical solutions must be found to help stabilizing the currency value

The President of the Southern Transitional Council, President Aidarous Qassem Al-Zubaidi, chaired on Sunday, in the capital, Aden, a second meeting with the Economic Committee and the Southern Money Exchangers Association.

The meeting was attended by the Economic Adviser to President Al-Zubaidi, Minister of Transport in the parity government, Dr. Abdul Salam Humaid, and members of the Economic Committee and the Southern Money Exchangers Association, in which President Al-Zubaidi welcomed all the attendees, stressing the need to intensify the work to ensure an improvement in the exchange rate value.

President Al-Zubaidi called on all money exchangers in the capital, Aden, to reach to practical outcomes for this meeting, to serve as decisions to be implemented and to help stabilizing the local currency.

President Al-Zubaidi stressed the importance of getting beneficial outcomes for the southern citizens, and adopting them as an actual program of work that contributes in alleviating the suffering of citizens, especially in this critical circumstance in which the government and the Central Bank have abandoned their duties.

President Al-Zubaidi stressed that the Central Bank and the government are one of the reasons for the current deterioration, noting that the Southern Transitional Council, and the steadfast people of the South, will not wait long in the face of the economic crisis that hit the governorates of the South, and caused great suffering among the citizens.

For his part, the official spokesman for the Exchangers Association, Sobhi Baghafar, stressed that the process does not take place properly unless the monetary cycle is completed, noting the need for an integrated system between the Central Bank and the Ministry of Finance.

Baghafar indicated that they worked in the banking sector to stabilize the price value of the currency, and expressed their willingness to implement any procedure with the help of the security and the Chamber of Commerce, stressing the desire of the Money Exchangers Association to form a payments committee, and that what happened in the market is the most fake, stressing the need to stop importing luxuries and to focus on basic materials.

He pointed out to the need to control the smuggling process through networks and entrances, stressing that there is a process of making fake money exchangers which requires tightening oversight to control financial speculators and violators, stressing that the Money Exchangers Association has provided many solutions, but no one is working on treatments, including the loss of the monitoring and control element.

Baghafar demanded the necessity of banks branches in the capital, Aden, to stand with the Association of Money Exchangers, and to approve a currency pricing in which everyone participates and to establish it on reality, stressing that the commercial banks in the capital are working against the exchange in the south.

In conclusion, the meeting came out with a number of items, the most important of which is setting the exchange price by a decision issued by the Exchangers Association, and the security and supervisory apparatus of the Southern Transitional Council to follow up on its implementation, as well as not allowing the exit of hard foreign currency from the South and only allowing its entry, in addition to not allowing points of sale to operate uncovered, and the implementation of circulars issued by the Exchangers Association.

The meeting also came out to assign the ministers of the Southern Transitional Council in the government of parity to put pressure on the government to rationalize consumption, as well as not dealing with foreign hard currency in the sale and purchase of local and other products in the markets, in addition to controlling unlicensed money exchangers, and holding money exchangers who did not adhere to the prices set by the association.

The President Aidarous Al-Zubaidi, had held a meeting a few days ago with the Economic Committee and the Money Exchangers Association, during which he stressed the need to continue meetings with all money exchangers, to find effective solutions that positively reflect on the people's living. 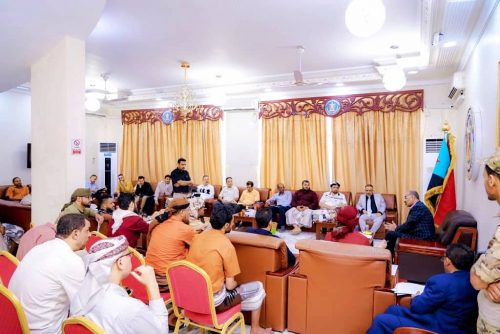