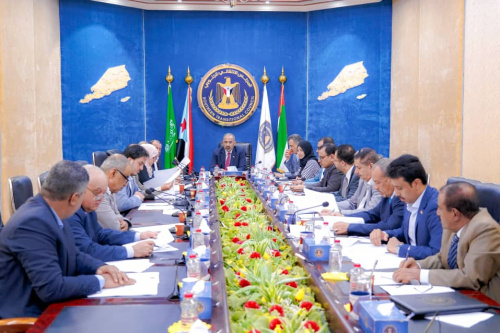 In the meeting attended by the Secretary-General of the Presidency of the Council, the Governor of the capital, Aden, Ahmed Hamed Lamlas, and the Council’s ministers in the government, the Presidency stood before the report of the Administrative Commission of the National Assembly on the results of holding the fourth session of the National Assembly, and its final statement, praising the level of attendance, and the quality of issues that it was raised, and the nature of the decisions and recommendations that came out of the session.

The Presidency considered the decisions and recommendations that came out of the session as a work program for the representatives of the people of the South, which should be embodied in the framework of their daily activities, and their oversight role in the various districts and governorates along with the local executive bodies of the Council, and the southern social and political components with which they share the same goals and aspirations represented in restoring the full sovereignty state of the south.

The Presidency discussed the most important issues related to the return of the government to the capital, Aden, in accordance with the understandings reached by the delegation of the negotiating council in the Saudi capital, Riyadh, under the sponsorship of the Kingdom of Saudi Arabia, for the implementation of the Riyadh Agreement, and the obligations stipulated in the terms of the agreement, which are before the government table, foremost among them is providing basic services to citizens in the liberated governorates of the South, paying salaries, and implementing the reconstruction file.

The Presidency of the Council also reviewed the report submitted by the follow-up team to the crisis and political developments, considering the proposals an appropriate framework to activate the performance of the Council, and the negotiating delegation to implement the benefits of the South, foremost of which is the agreement on the joint delegation, and the move to the comprehensive political process sponsored by the United Nations.

In the internal affairs, the Presidency of the Council decided to take strict and deterrent measures against those responsible for the unfortunate events that took place in Sheikh Othman district in the capital, Aden, on Wednesday, and give no space for those who call for sedition, to ensure that it is not exploited for the benefit of the enemies of the south, stressing the need to ensure that no return to that square that it is considered outsiders on the military and security doctrine of the Southern Armed Forces.

The Presidency discussed a number of issues and the existing shortcomings in a number of institutions, including Aden International Airport, and the need to provide a minimum level of services, as well as calling on the government to desist from practices, and the restrictions imposed on some ministries and government interests, stressing the need to enable members of the government to perform their duties and exercise their legal powers and competencies away from any pressures, and in a way that contributes to alleviating the miserable conditions of the citizens in the liberated governorates of the South.

The Presidency was also briefed on the determinants of the work of international organizations operating in Yemen, which are based in Sana'a, stressing the need to reconsider dealing with these organizations, and rooting their role and movements in the southern governorates, according to the generally accepted conditions, and away from circumvention or employment, and in a manner that enhances the role of the Ministries of Planning and International Cooperation, and Social Affairs and Labor, with regard to legislating their work and performing the tasks for which they were created, in order to enhance the future presence of the South in this process in accordance with established traditions and norms.

At the conclusion of the meeting, the Presidency of the Council approved a number of decisions related to the work of the Council bodies, and the requirements for activating their future role.