President Al-Zubaidi: "We've opened all doors for the cause of our people and been able to receive recognition from opponents before friends".

President Al-Zubaidi: "We've opened all doors for the cause of our people and been able to receive recognition from opponents before friends". 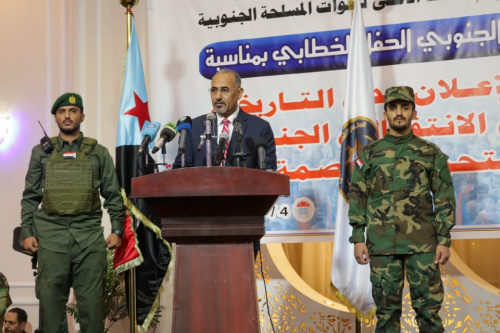 President of the STC, Aidaroos Qassim Al-Zubaidi, Commander-in-Chief of the Southern Armed Forces, addressed the attendees of the ceremony, the members of the Presidency of the Transitional Council, members of the National Assembly and General Secretariat, as well as local leaders, social society activists and press media and social figures.

Hereunder is the speech of President Al-Zubaidi:

The Southern Transitional Council believes that its historical responsibility is to fulfil the aspirations and hopes of the Southern people which is their desire for independence and to build their free and independent Southern state.

Since it was founded, the Southern Transitional Council has poised all its efforts to place the cause of our southern people on the correct political track through its political and diplomatic exertions and was able to work firmly and steadily with a mature and clear vision, aimed to achieve great successes for our Southern cause.

The STC was able to organize its efforts to complete the structure of the STC and form its various central and local bodies. The STC's presence has become active in all cities and regions across the South and internationally, it was able to influence regional and key decision-making countries.

Politically, the STC succeeded, in just three years, to gain the confidence of friendly nations and previous opponents as well as many influential and powerful decision making countries.

On the security and military trail, the evidence is clear in the victories we gained towards the safeguarding of the Arab project as well as our response to the Houthi- Iranian  militias where the Southern armed forces emerged as an active and formidable force within the Arab coalition led by Saudi Arabia.

The STC achieved remarkable successes in cooperating  with our brothers in the UAE in all the  Southern provinces in combating extremism and terrorism and stabilizing security and stability in the South.

The Southern Transitional Council’s approach is reflected in its fundamental principles which are expressed in Aden's Historic Declaration and political vision, which confirms that the South is for all its people based on: reconciliation, tolerance, national partnership, adopting the principle of dialogue and peaceful solutions to eradicate differences and solve problems and strengthening the Southern national alignment.

Therefore, as dictated by the historical responsibility before our people, our arms remain extended for dialogue with all the people of the South.  Today we call all Southerners to unite their ranks, organize their efforts and to mobilize all capabilities to protect the people and secure their gains and achieve their aspirations.

The challenges which we face today, a fierce war waged by the defeated forces who have consistently practiced corruption and perpetuated the policies of collective punishment against our people, come to realize that those forces are approaching their inevitable end and this dictates that we continue to work at a high pace and that we redouble our efforts, to lift the suffering of our people.

From this point of view, we call on the government of the ‘Equal Governance’  to return to the capital Aden and fulfil its promises and perform its tasks in improving services, reimbursing salaries, addressing imbalances and fighting corruption as well as alleviating the economic and living conditions of our people in the South. The government is requested to exercise its powers to oblige all institutions in all the provinces to supply their revenues to the Central Bank in Aden, as well as calling on them to be transparent and to inform the public about the forces that are exercising collective punishment against our people, and to do their duties to confront the dominant forces and the merchants of war.

In this regard, we reaffirm our principled and firm position on the covenant with our people and are aware of their suffering and that we will lead the ranks to protect them. We stress that patience has limits towards the abusive policies and collective punishment that targets our people and that the STC’s options are open to addressing the issues of our people to meet their aspirations. The Southern Transitional Council can manage the South according to the surrounding developments and situations to protect the security and interests of the states of the region and the world.

The Riyadh Agreement embodies the regional and international recognition of the Southern Transitional Council and the Southern issue. It provides a real opportunity to bring about peace and to correct the imbalances of the war but the forces of corruption and terrorism continue to disrupt it and try to drain it of its content. Therefore, we call on the sponsors of the agreement to compel the other party to cancel all unilateral resolutions and commit to prior consultation according to the provisions of the agreement and to implement all the requirements of the agreement which include: forming the negotiating delegation, forming the economic bodies, structuring the ministries of interior, defence, foreign affairs and all ministries and public institutions as well as removing the aggressive militias who based their headquarters in Shabwa, Wadi Hadramaut and Al-Mahra who embrace and export terrorism, pillage the resources of the South, eliminate its children and confiscate their rights in addition to threatening international security and peace.

We reaffirm our active partnership with the Saudi-led Arab coalition in opposing the pro-Iranian Houthi militias, in combating extremism and terrorism, and protecting regional and international interests in the Arab Sea, the Gulf of Aden and Bab al-Mandab.

While welcoming all the ongoing efforts and energies to end the war and commence a comprehensive political process, we reiterate that the position of the Southern Transitional Council continues and will remain the bearer of the banner of peace that continues to endeavour to stop the war and address the humanitarian situation and support all international and regional initiatives. The STC is keen to offer its efforts to deliver peace to the South and Yemen but will not accept any compromises or solutions that dismiss the cause of the Southern people or avert their political future contrary to their will and aspirations.

We salute the heroes of our valiant Southern armed forces, who are engaged in historical epics to defend our land and take heroic positions to secure the gains of our people and protect them from acts of invasion, aggression, and terrorist organizations namely the Houthi militias, the Muslim Brotherhood, al-Qaeda and ISIS.

We trust that the enormous sacrifices made by our people will be sealed by victory, that we are moving strongly and steadily towards achieving the goal of our people to restore and build an independent fully sovereign federal state on the borders of pre-May 21, 1990.   We are reaching a promising stage of achieving political and economic successes to recover from the current situation, drawing our resolve from the will of our people and the justice of their cause. This is our pledge to our people.

We ask Allah Almighty to have mercy on our righteous martyrs and heal our wounded.

Commander-in-Chief of the Southern Armed Forces