Al-Kaf meets with the President of the French "Promédation" organization

Al-Kaf meets with the President of the French "Promédation" organization 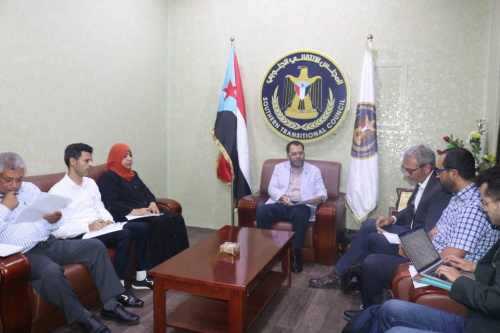 Eng. Al-Kaf listened from Mr. Erck to a brief explanation about the nature of the work of the French organization that works in the field of conflict resolution and providing support for the mediation and negotiation process in case of armed conflicts and political crises.

During the meeting, Al-Kaf presented an introductory briefing on the Southern Transitional Council, stressing that the Council rests on the responsibility of representing the people of the south and expressing their national goals, therefore, the task is not limited to participating in negotiations, but on the way to reach it.

Al-Kaf also affirmed the Transitional Council’s commitment and eagerness to implement the Riyadh Agreement, and overcoming any obstacles that postpone the practical implementation of all its provisions without any selection, and finding effective solutions to achieve security and stability in the region.

The meeting was attended by Dr. Najwa Fadl, Advisor to the President of the Southern Transitional Council for Women Affairs, Dr. Khaled Bamdhaf, Head of the Political Department, Dr. Abdulaziz Ali Hadi, Deputy Head of the Human Rights Department, and Rafat Saleh Abdel Hamid, Advisor to the Acting Secretary-General, member of the General Directorate of Foreign Affairs of the Council.