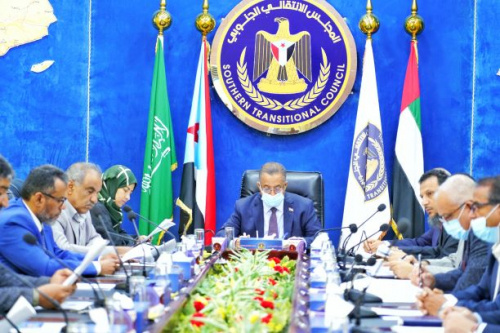 The Presidency of the Southern Transitional Council held its periodic meeting on Saturday, chaired by Dr. Nasser Thabet Al-Khobaji, Acting President of the Council, Head of the Negotiations Affairs Unit.

The Presidency renewed its congratulations to the masses of our great southern people on the occasion of the blessed month of Ramadan, and highly valued in the context the important speech delivered by President Aidaroos Qasim Al-Zubaidi, the President of the Transitional Council, to our people at home and abroad on the occasion of the blessed month of Ramadan, which reflected many consistent positions of the Transitional Council towards the suffering of our people as a result of the comprehensive war that the South is exposed to in various fields, stressing that all plans will fail just as their predecessors failed in the face of the legendary steadfastness of our people and their precious sacrifices in order to obtain their full and unimpaired rights.

In the meeting was attended by the cabinet ministers in the government of parity, the security directors of Aden the capital and Lahj, and the leaders of backup and support and the security belt, Al-Asifa brigades, and the special security forces, in which the meeting strongly condemned the cowardly methods and practices, and the acts of murder, warfare and kidnapping practiced by the forces of extremism and terrorism against the people of the South, the most recent of which was the kidnapping of the young man, Abdel Moneim Sheikh, the brother of Abd Al-Rahman Sheikh, the member of the Presidency of the Southern Transitional Council, by the so-called Amjad Khaled, one of the symbols of terrorism and the killing and terrorist bombings that Aden witnessed over the past period.

The Presidency affirmed the Council’s insistence on bringing the so-called Amjad Khaled to justice to hold him accountable for the terrorist acts that he was directly involved during the past period,  in which the blood of the benevolent people of our people that was shed by terrorists and their financiers will not be wasted, whatever the sacrifices are.

The Presidency warned of the consequences of the continued kidnapping of the young man, Abdel Moneim Sheikh, and called for his immediate release, without any conditions, and for the perpetrators of this process to be brought to legal accountability.

The Presidency reiterated that the main stake of the South, the Transitional Council, and the living civilian forces that depend on is the people of the South and their free will to resist all kinds of oppression, tyranny, abolition and siege that are trying to force them to abandon their cause, which achieved a growing popular turn from the far south to the extreme, and even crossed the borders of the south to the region and the world, which is now dealing with the south and the Southern Transitional Council as the main party and representative of the south in any future settlement of the Yemeni issue.

The Presidency of the Southern Transitional Council also renewed the call for the Arab coalition to implement its obligations and duties, foremost of which are the payment of late financial dues and operational expenses for the southern armed forces, in accordance with the understandings concluded in advance after the departure of the duty force 293, in order to preserve the high combat morale of the forces stationed in the lines of contact in the face of the Houthi and terrorist militias, and in accordance with the provisions of the Riyadh Agreement and the mechanism for accelerating it.

Regarding the organizational issue, the Presidency, reviewed in its discussion the General Secretariat's report on its activities for the first half of April, and the activities related to Ramadan program and the activities of the fourth anniversary of the historic Aden Declaration, and the establishment of the Southern Transitional Council on May 4 and 11, to consider these events and programs as a firm tradition for the values ​​and strong ties that unite the Transitional Council bodies at the central, provincial and district levels with our great southern people everywhere, based on the firm and deep belief in the cause of the South and the goals of restoring sovereignty, identity and national dignity of the state.

The Presidency stressed the importance of employing this process for more solidarity and comprehensive national alignment to face all challenges, conspiracies and plans to corrupt the southern political, social and cultural environment through attempts to purchase receivables and the continuation of the war of services within the comprehensive war waged by the Yemeni influential parties with a green light from well-known poles in legitimacy and with external funding .