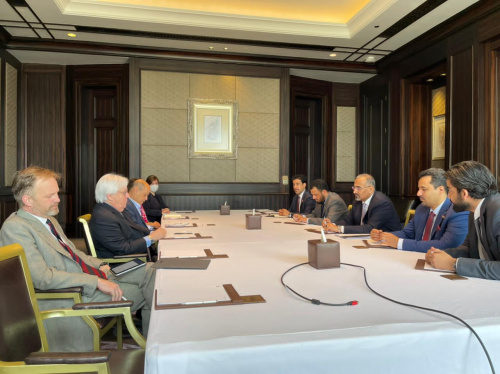 The President of the Southern Transitional Council, Supreme Commander of the Southern Armed Forces, President Aidaroos Qassem Al-Zubaidi, met on Wednesday, in the UAE capital, Abu Dhabi, with the Special Envoy of the United Nations Secretary-General to Yemen, Martin Griffiths.

The meeting discussed developments in the political, military and humanitarian file, and the overall situation in our country, as this meeting comes within the intensive discussions and efforts made by the United Nations in its endeavor to reach a comprehensive ceasefire and start a broad political process.

President Al-Zubaidi affirmed the support of the Southern Transitional Council for the efforts of the Special Envoy, and the Council's readiness to engage seriously in all stages of the political process sponsored by the United Nations, stressing that resolving the southern issue in accordance with the aspirations of the southern people represented in restoring their identity, independence and building their state, is the basis for any proposed solutions. .

President Al-Zubaidi indicated that the effectiveness of any upcoming solutions lies in their ability to address the causes of the conflict that began since 1994 on the basis of the issue of the South, pointing out that the reality of the parties on the ground requires the formulation of an international initiative that organizes realistic and serious negotiations, and reflects the urgent need to address the southern and northern conflict. It respects the aspirations and choices of the people in the south, and guarantees an end to the file of the renewed crisis that has continued since 1994.

The President of the Southern Transitional Council reiterated that the Council supports the process of a comprehensive ceasefire, and that the southern forces continue to adhere to the state of defense and prepare to face any targeting or aggression against the south.

President Al-Zubaidi noted that this stage requires courageous measures and decisions to face the challenges presented today, foremost of which is the return of terrorist activity after the departure of the Shabwani Elite Forces, and the continued targeting by extremist groups against southern forces and leaders in Abyan, Shabwa and Hadramout valley, stressing the need for the international community, and the countries in the region and the coalition to undertake and play a serious role in facing this extremely dangerous challenge.

Al-Zubaidi also indicated that the South and Yemen are facing an acute humanitarian crisis, represented in the disruption of salaries, lack of services, and new Corona pandemic, in light of a weak medical infrastructure, and a real absence of a regional and international humanitarian role, stressing that the Council is doing everything it can to help people according to the available capabilities. .

For his part, the Special Envoy said, "The comprehensive political process under the auspices of the United Nations is necessary to achieve sustainable peace," expressing concern about the deteriorating humanitarian, economic and security situation, indicating that the country is in need of urgent humanitarian support.

The side of Secretary-General's envoy included, Mr. Moeen Shreim, Deputy Envoy, and Major General Macintosh, the Envoy's Military Adviser, and the Envoy's political advisor, Ms. April Lee, and the Special Assistant to the Envoy, Franzska Zethaler.