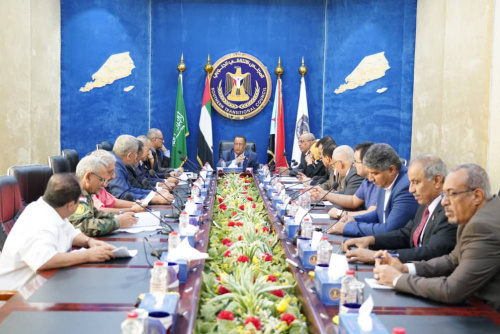 The Presidency of the Southern Transitional Council held its periodic meeting on Saturday, under the chairmanship of Dr. Nasser Al-Khobaji, Acting President of the Council, Head of the Negotiations Affairs Unit.

At the beginning of the meeting, Dr. Al-Khobaji conveyed the greetings of the President of the Transitional Council, President Aidaroos Qassem Al-Zubaidi, and Sheikh Hani Ali bin Brik, Vice President of the Council, to the attendees, presenting a brief picture of the course of the negotiation process and the remaining procedures to complete the executive mechanism of the Riyadh Agreement.

Dr. Al-Khobaji also presented a full explanation of the program of foreign visits and the nature of effective international positions through the meetings held by President Aidaroos Al-Zubaidi, and the negotiating team with the Arab coalition and the permanent members of the Security Council, as well as Mr. Martin Griffiths, the UN Secretary-General's envoy during the negotiation period.

In its meeting, the Presidency assessed the entirety of the issues raised in this aspect, foremost of which is the negotiation process, as well as the visit of President Al-Zubaidi and his accompanying delegation to the Russian Federation and its role in promoting peace efforts in the region.

The military advisor to the president of the Council and the director of the Council’s president’s office participated in the meeting, in which they contributed to presenting their remarks alongside the members of the Presidency, while the vice president and members of the negotiating delegation presented a set of clarifications that focused on the successes and obstacles that accompanied the negotiation process, and the importance of starting to activate the implementation mechanism of the Riyadh Agreement, and consolidates popular support for its implementation.

The deputy head and members of the negotiating delegation team stressed the need for serious preparation to go into the midst of the final negotiation phase that will be sponsored by the United Nations, as well as assistance to the government to enable it to perform its tasks that secure the rebuilding of ministries and institutions, and to provide appropriate conditions for the work of ministers, their movements and places of residence, and the return of embassies and international organizations to carry out their activities from Aden the capital.

The Presidency also stood before a report submitted by Major General Mohsen Askar, the military advisor to the president of the Council, head of the Field Military Coordination and Follow-up Committee, during which he reviewed the military and security situation in the South and assessed what has been implemented in the military part of the Riyadh Agreement and the obstacles to its implementation.

In its discussion of developments, the Presidency stressed the need for the other party to adhere to the principle of consultation established by the agreement in any upcoming appointments in the central or government-affiliated state agencies, foremost among which are the judicial, financial, banking, security, intelligence, judicial, supervisory, banking and other agencies of the central administration of the state and its institutions.

The Presidency noted the need to consult also in any decisions or procedures for forming supreme committees in the fields of economy and finance, and any other decisions that reflect on their implementation on the living life of citizens, and do not take into account the parity included in the agreement in order to ensure their prior implementation on reality.

The Presidency discussed in its meeting a number of topics and issues related to the work of the council’s bodies and took the necessary measures regarding them.