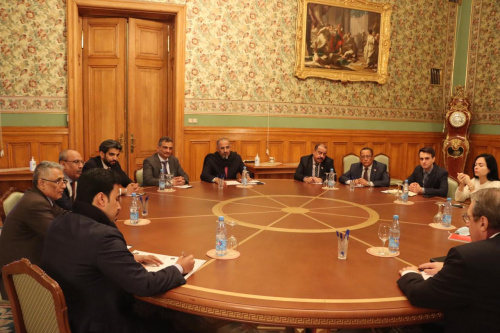 The President of the Southern Transitional Council, Supreme Commander of the Southern Armed Forces, President Aidaroos Qasim Al-Zubaidi, and his accompanying delegation met on Monday morning, at the Ministry of Foreign Affairs of the Russian Federation, with Mr. Mikhail Bogdanov, Deputy Foreign Minister; Special Representative of President Vladimir Putin to the Middle East and Africa.

President Al-Zubaidi and his accompanying delegation were received upon their arrival at the ministry’s building, by Mr. Mikhail Baghdanov, and the Deputy Head of the Middle East Department, and officials from the Russian Defense and Foreign Ministries.

The Russian side welcomed President Al-Zubaidi and his accompanying delegation, in which President Al-Zubaidi spoke at the beginning of the meeting, through which he and his accompanying delegation thanked the friends in the government of the Russian Federation for the invitation, and the warm reception and the generous hospitality, referring to the historical relations that have been enhanced between the South and the Russian Federation and the people of the two friendly countries, conveying to Mr. Baghdanov and to President Vladimir Putin the greetings of the southern people.

President Al-Zubaidi pointed out that this meeting represents an opportunity to pass through the history of friendship, brotherhood and cooperation between the South and the Russian Federation, as the fingerprints and positions of Russian friends are still present at all levels in various cities and countryside of the South.

President Al-Zubaidi noted that there are many joint postures gather us towards many issues in the South, Yemen, and the region in general, and that require more joint cooperation and coordination to confront the challenges and threats, and take care of mutual interests, especially with regard to Bab al-Mandab Strait and the Gulf of Aden, shipping lines, and combating terrorism, and political and economic integration and cooperation.

The President assured the importance of the Riyadh Agreement and the opportunity it represents towards the normalization of conditions, and the return of services, and achieving a comprehensive peace process, stressing the need to complete its implementation, stressing at the same time the need to involve the South as a key party in the comprehensive political process sponsored by the United Nations, and that any attempt to exclude the South and its legitimate cause will fail.

The President also affirmed the Southern Transitional Council’s adherence to the goals and aspirations of the southern people and their right to self-determination, and to restore their identity, and to build their independent state within its borders of before May 21, 1990.

For his part, Mr. Baghdanov expressed his welcome to the visit of President Aidaroos Al-Zubaidi and his accompanying delegation to the Russian Federation, stressing that this meeting comes in the context of a series of contacts and meetings that he had with President Al-Zubaidi in the last period.

Mr. Baghdanov stressed that the Russian Federation supports a comprehensive political process that guarantees an end to the war and addresses all issues, with the Southern issue being at its forefront, expressing Russia's respect for the aspirations and choices of the people.

The meeting included fruitful and constructive talks took place on a number of files and issues related to the situation in the south, Yemen and the region.