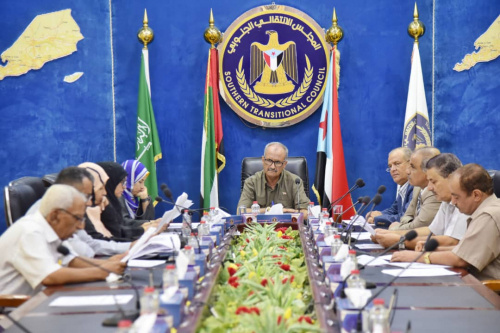 At the beginning of the meeting, the attendees stood a minute of silence to read Surat Al-Fatiha for the souls of the martyrs who died in the terrorist attack on Aden International Airport, praying to the Almighty Allah to bless the wounded with a speedy recovery.

The meeting confirmed that this sinful attack, despite its painful results, will not deter the Transitional Council from continuing to implement the Riyadh Agreement, and its support for the government of power-sharing between the south and the north, to implement its tasks, renewing the Council’s call for the international participation in the investigation of the incident in order to reveal the party that is supporting this criminal act, and its terrorist tools that implemented it.

The Presidency called on the Coalition leadership to secure the airspace of Aden the capital to thwart such plans in the future.

The meeting discussed the general conditions and developments in the national arena, calling on the prime minister to promptly direct to end the practices and violations carried out by the military and security militias in Shabwa governorate against the Transitional Council leaders and all those who contradict their opinion among the people of the province and its tribes, as these forces keep establishing military checkpoints armed with various types of weapons, and raiding on villages and work facilities and homes and carry out arrests, stalking, illegal kidnappings and disappearances to unknown locations, in a clear challenge and deliberate obstruction to thwart the Riyadh Agreement.

The Presidency called on the prime minister to direct the concerned parties to the speedy release of all the kidnapped and arrested, stressing the need to work in accordance with the laws and regulations.

The Presidency, in this meeting, which was attended by the Director of the Office of the President of the Council, and Dr. Mohammad Al-Ammari, member of the Decision Making Support Center, listened to the monthly analysis report of the Center, as well as the weekly performance reports of the National Assembly and the General Secretariat, in addition to a number of other topics and took the necessary measures regarding them .