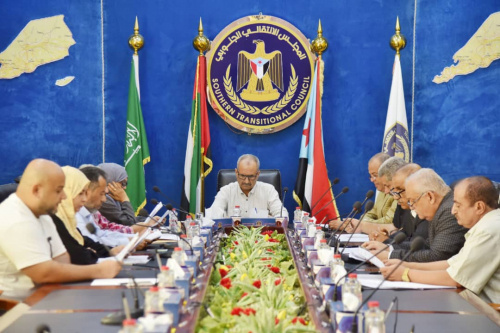 The Presidency of the Southern Transitional Council held On Sunday, its weekly periodic meeting, chaired by Mr. Fadl Mohammad Al-Jaadi, Deputy Secretary-General of the General Secretariat of the Presidency.

The Presidency praised the efforts of the Southern Field Military Committee to follow the directives of the President of the Council to implement the obligations of forces separation, redeployment, and repositioning of the southern forces in accordance with the dates specified in the plan that is supervised by the Arab Coalition, pointing to its endurance and eagerness to work with the Coalition to implement the agreement despite the continuing of daily and repeated violations of the other party by bombing sites of our southern forces with various types of weapons, and the continued fall of wounded in our southern units, and all in the presence of the monitoring committees of the Arab Coalition, as well as the continued pushing of terrorist elements to the fronts and fortification of new sites on the front, after the Arab coalition announced the agreement.

The meeting called on the leadership of the Arab Coalition to take a firm stance to stop these violations, as a basic and urgent requirement to ensure the continuation of the implementation of other tasks, indicating that the other party has followed methods of circumvention and fraud in the implementation of some of its corresponding obligations and fabricating arguments and excuses to reject them, and its unilaterally obstruction of the arrival of the southern observers in the joint monitoring team, and preventing them from performing their supervisory duties to verify the correctness of the implementation, demanding to reject any delay or circumvention of the implementation in order to preserve the credibility of implementing the agreement, which would be difficult for the Council to continue working with if the other party continues its violating behavior about it.

The Presidency affirmed that the Southern Transitional Council will remain the initiator with caution and patience to support the directions of the leadership of the Arab Coalition for the success of this mission that serves the interests of our people and the region in general, appreciating the patience and wisdom of the Coalition led by the Kingdom of Saudi Arabia, which has made tremendous efforts to reach this consensus phase, calling on it to continue its pressure to achieve integration in the implementation of the tasks by the two parties, and the speed of announcing the government, to start arranging the general conditions, addressing services, and uniting everyone's efforts to stop the Persian expansion in the region.

In internal affairs, the meeting discussed the report of the Decision Making Support Center on public developments, and reviewed the final review of the General Secretariat’s perception regarding unifying the concepts and vocabulary of the official media discourse of the Council, and also listened to the report of the Presidency Commission on evaluating the performance of the local leadership in Abyan Governorate.