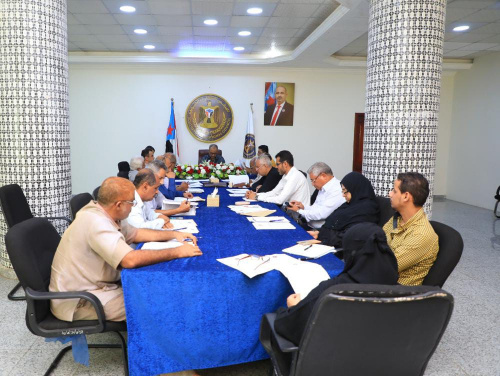 The meeting offered greetings to the steadfast southern armed forces on the fronts, which are winning victories and laying out heroic epics, and prayed mercy for the righteous martyrs who sacrificed their lives for the homeland and people of the South.

The meeting reviewed the economic scene report submitted by the Economic Department, which provided a reading of the most prominent economic issues in the southern arena, foremost of which is the problem of the collapse of the local currency exchange rate, the deterioration of services conditions, especially electricity and water, the fuel and gas crisis, and the repercussions of this economic situation on the south and citizens' livelihood, praising the efforts made by the governor of the capital, Aden, Mr. Ahmed Lamlas, to alleviate these repercussions, in light of the neglect of the concerned parties in the government towards the suffering of people.

The meeting also reviewed on the performance report of the Department of Youth and Students during the third semester of 2020, which included the most prominent activities and achievements of the department and its level of performance.

The meeting previewed the weekly activity report of the General Secretariat departments during the past week, and reviewed and approved the minutes of its previous meeting.