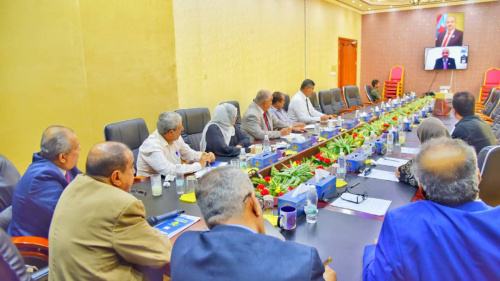 President Al-Zubaidi briefed the meeting on the overall activities of the Transitional Council's negotiating delegation and the results of its meetings with diplomatic missions and bodies, and put them before the efforts made to normalize the situation in the capital Aden and neighboring governorates and to provide services to citizens, in addition to the procedures to implement the Riyadh Agreement, indicating that the negotiating delegation of the Council presented its plan for military repositioning, in which it has been agreed upon many of it, stressing that our relations with the coalition are a permanent strategic relationship based on partnership.

In the context of his speech, President Al-Zubaidi reaffirmed the implementation of the principle of equality, stressing also that there would be no differences or discrepancies between the components of the south in this regard.

President Al-Zubaidi stressed that the leadership of the Transitional Council pays great attention to all issues at home and works to solve them with the concerned authorities, especially the issue of late salaries for southern soldiers, indicating that there are daily efforts being made to address them.

President Al-Zubaidi pointed out that the Transitional Council supports their demands and places their rights as a priority and will remain in addition to their legitimate rights that it will never give up, stressing on the other hand that their deprivation should not cause additional harm to citizens who live in difficult circumstances, as the procedures of the protesters make it worse, appreciating the efforts that was made by Ahmed Hamid Lamlas, the Secretary-General of the Presidency of the Council, the governor of Aden the capital, and the response of the sit-in leadership to stop the damage caused by the recent measures to the lives of all citizens.

For his part, Major General Ahmed Saeed bin Brik, Chairman of the National Assembly, touched on the efforts made to release the detainees in the exchange process with the Brotherhood militias, as well as the results of his meetings with the southern components, stressing on the continuation of those dialogues and meetings in accordance with the principle of "South-South" dialogue pursued by the Council. .

During the meeting, a review and discussion of the vision presented by the General Secretariat for the celebration of the 57th anniversary of the glorious October 14th  Revolution, including the sections of the celebration program, the tasks of the members of the preparatory committee, and the media preparation mechanism for it, and the meeting took the necessary actions in this regard.

The meeting also stood in front of a series of developments on the national arena, foremost of which is launching the new school year, and the teachers and students' response to the governor's call to join their schools.

In the context, the Presidency of the Southern Transitional Council stressed on the importance of science to overcome the policy of ignorance that the enemies of the south wanted for our people during the past decades, offering its thanks and appreciation for the teachers union's response and support for this approach.